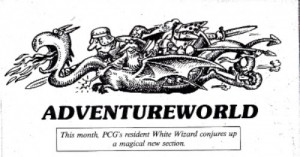 Help columns were a regular feature of computer magazine in the 1980s. As Adventure games were perhaps the most challenging games to play frequently leaving players stuck and unable to progress, the Adventure help guru was a must for most game publications. The popularity of “The Hobbit” and the challenges of the Megler’s world and puzzles and the possibilities of Mitchell’s parser saw many column inches dedicated to the game.

“PC Games: Australia Guide to Microcomputers” had the White Wizards ‘Adventureworld’ column where not only was help offered “Hobbit” players would frequently share their percentage scores including a few 100% complete. “The Australian Commodore and Amiga Review” Adventurers Realm’ column got other players to write in with solutions for stuck players awarding ‘Adventurer of the Month’ and ‘Zorker of the Month’ for help rendered. The Happy Hacker (Stuart Elflett) who ran the Adventure Club of Australia published a regular ‘Adventurers News’ letter where the clubs network of adventures pooled their knowledge to help others through the darkest dungeons. The Happy Hacker also penned an ‘Adventures Hints Column’ for Australia’s “The Commodore Magazine”.

Fans of “The Hobbit” seeking help and helping each other was an international phenomenon. Tony Bridge wrote help columns for the United Kingdom magazines “Popular Computing Weekly” and the “Micro Adventurer”. In November 1983 a distraught father and daughter wrote to ask Tony’s help in escaping the Goblins Dungeon in “The Hobbit” – so many players bête noir. In their letters players often shared their discoveries hoping others could explain their significance such as an excited player realising that the game recognised the words “ravine, stairs, rug, man and hobbit” wanted help identifying a place to actually use them in the game. (December 1983) Whilst in January 1984 there is an appeal from a player on how to finish the game! Having arrived home to BagEnd with all the treasure and the ring but not knowing the purpose of the trunk in that hallway.

To finish reading this column, go to Play it again’s help columns article.