“Pull the chair out by the hearth,” says the confused innkeeper as you log in to Hearthstone, an online card game.

Hearthstone is a fast-paced challenging intellectual exercise, pitting your cards (the deck selected but the order drawn by chance) and your strategies against your opponent (a real person or the game itself) in timed rounds. Based on the card game Magic the Gathering with variations utilizing the benefits of a computer game, Hearthstone adds twists like “random” card selections really being random. Some cards pull a “random” beast, for example, and it might be nothing you’ve seen before. Surprises can be a good or a bad thing, depending on a certain point of view.

The class you play is based on a character — Anduin the priest or Valeria the Rogue, for example — from World of Warcraft as are many of the cards the game uses. Each class has special abilities, attributes and minions as well as having access to generic cards. A priest heals; a warrior gives himself armor; a druid gives himself armor and does damage; a shaman puts down totems and so on. In practice and in online play, players use one of the 9 classes and play against any one of the 9 classes including their own type.

If your online opponent doesn’t move or goes AFK because, y’know, MUMMY CALLED, then you’re almost sure to win while his turn time gets shorter and shorter. There’s no penalty to you for a player going offline.

It’s possible to play Hearthstone without ANY financial outlay. The basic game is free. If you upload an Android Tablet version, you get bonus cards (I must get the minion to do this on the laptop). If you play practice adventures, you unlock basic cards and, eventually, unlock classic cards just by leveling up your class. Daily quests offer gold rewards, but these require playing online against real people. A win in ‘practice’ mode does not count. Wins and fulfilling quests (like killing 40 minions) earn gold that can be spent in the shop to purchase more cards to improve your decks.

In the Naxramas expansion game, players are pitted against all the bosses in — surprise, surprise — Naxramas the Lich King WoW raid. 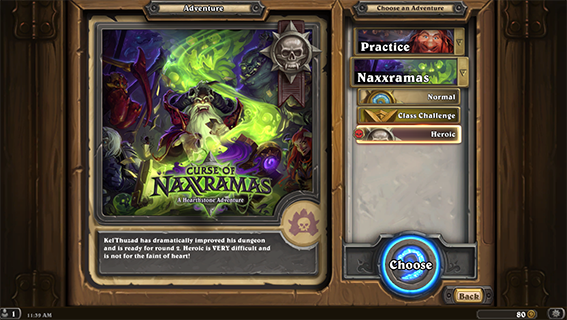 Knowing their market as well as they do, Blizzard staff have been sure to resource voice actors and build humor into the game. Like Kel’Thuzad’s commentary throughout boss selection for Naxramas. 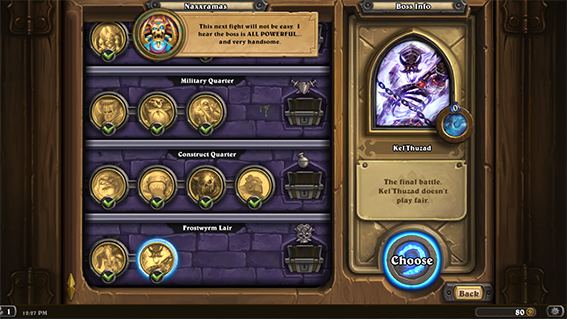 In my opinion the best features of Hearthstone in comparison to Magic are availability of opponents and large print making Hearthstone much more accessible to me.

The bad and the ugly

There are downsides to Hearthstone, many of which are probably issues with Magic too. I found playing online really frustrating, especially when first starting out. The games are ranked. I’ve been level 20 (out of 25, highest number being the lowest rank); all my cards have been basic while playing against legendary cards.

Card ranking indicates the potential for usefulness and lethality (is that a word? It is now). In my opinion, there should be an equivalent item level ranking: in World of Warcraft, someone wearing all green armor (lower quality armor, the equivalent of basic or white cards) can’t get into heroic dungeons in Looking for Group because heroic dungeons require higher level armor to withstand the punishment taken from bosses. So why pit someone with basic or white cards against someone with legendary (LETHAL orange) cards? There could be a subset of ranks for those without sufficiently good quality cards playing at the bottom levels, gaining experience without getting HEADDESK frustrated by the futility of it all.

When feeling frustrated, it’s a good idea to look online for deck build suggestions. Icy Veins is a good resource for World of Warcraft and Hearthstone; I believe they’re fans who’ve assembled some useful information in a logical manner.

The Naxramas expansion cost about $32 Australian. Running through the basic quests and the class challenges was fairly quick, earning lots of yummy new cards including some (orange) legendary cards. I still haven’t won any heroic challenges; I must persevere and experiment with deck build suggestions.

Below is a screenshot of me playing against Howard. As you can see, I went first. I didn’t receive a card (I should have 4 cards) but the cards have been moved to the left to accommodate the 4th card that was never handed to me. I couldn’t do anything — I tried everything, including clicking on ‘end turn’. Eventually it timed out and it was Howard’s turn. 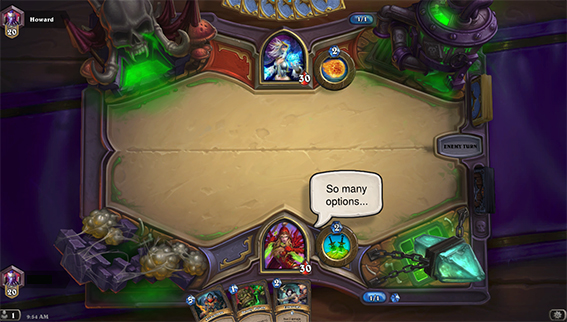 He didn’t move. At all. The game didn’t time out for Howard.

Meanwhile, you can see my character “thinking” about moving although it’s clearly HOWARD’S turn.

I’m not sure if this is a bug or if Howard hacked the game. Either way, it needs to be reported to Blizzard.

Guess what I’ve been unable to do? I can’t find any means of reporting bugs or hacks. No feedback forms. Nothing.

So. How do you report a bug in Hearthstone? @Blizzard_ANZ @PlayHearthstone Playing against Howard didn’t get a card, couldn’t click end turn

Hearthstone timed out FOR ME after about two hours because I hadn’t performed any actions. It took that long because, for the first hour or so, I kept emoting ‘oops’, ‘sorry’ and threats.

@DarkMatterzine @PlayHearthstone That sounds no good- you can report it here in the Tech support forum: http://t.co/82pMDZ4fCO

Except you can’t. If it’s a hack and you report it in the forums, you will get penalised. You have to email Blizzard instead. I don’t know how to tell the difference between a bug and a hack.

When playing online, player interaction other than playing the game is limited to 6 interactions: greetings, well played, thanks, sorry, oops and threats (comments are automatically generated). If a player is pissing you off, you can right-click on his portrait to “squelch” emotes.

The only time for me that emotes were irritating is when a dick player, over-confident in his cards, a sure win in his sights, emotes “sorry” Every. Fucking. Time. he moves, clobbering me. Once or twice, after he emoted “sorry” I emoted “thanks”. The first time there was a pause — a hesitation? — before he started up again. He was such a dick he said sorry Every. Time. Not just every TURN but Every. Time. his mage blasted me.

I had the satisfaction of wiping the board. ANNIHILATION.

The other kind of player is the kind who, knowing they’re going to win and this is their final, winning turn, stretch it out to last as long as possible. They’ll kill all your minions then turn their own minion into a 0 attack/1 health frog with taunt; they’ll buff up and use EVERY POSSIBLE CARD before reducing you from the 1 health point you have left. This is what the “concede” button is for.

so the availability of players online and the speed of play are fabulous features. I also find a few games of Hearthstone get the synapses firing in the morning, helping me start writing reviews or working on my novel. My struggles with reading the cards in Magic is a severe although not insurmountable handicap, overcome by Hearthstone‘s accessible format on my luverly 32 inch monitor.