At the Venice Film Festival in September 2013, Koji Hoshino, president of Studio Ghibli, announced the retirement of legendary filmmaker and animator, Hayao Miyazaki.

To celebrate the release of the film and his four decade contribution to filmmaking and animation, Madman has created this short video entitled ‘The Genius and Wonder of Hayao Miyazaki’.

For more information on The Wind Rises and the films of Hayao Miyazaki, visit www.thewindrises.com.au. 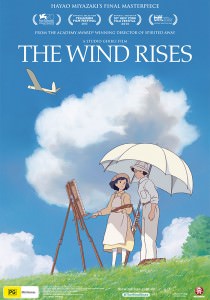 The timeline describes The Wind Rises:

This is the first film in which a character in a Studio Ghibli feature has been modelled after real people. The protagonist, Jiro, is based on two men who lived in the era that the film was set – aeronautical engineer Jiro Horikoshi and novelist Tatsuo Hori.

Miyazaki announced his definite retirement from feature filmmaking shortly after The Wind Rises was released in Japan.

The film has received excellent critical acclaim and won numerous awards around the world and is on the Academy Awards® shortlist for Best Animated Feature. See Miyazaki’s final masterpiece in Australian cinemas February 27, 2014.