The play script of Harry Potter and The Cursed Child Parts One and Two, published at 9.01 AEST on Sunday 31 July, has already sold over an estimated 170,000 copies in Australia alone in its print edition, in its first three days. In the Australian market in 2015 there were only 5 books that sold over 170,000 copies in the entire year.

“While we won’t have official Bookscan data until next Wednesday retailer feedback suggests that we sold over 170,000 copies in the first 3 days of sales. This is a phenomenal number and makes Harry Potter and the Cursed Child the biggest book in the Australian market since Harry Potter and the Deathly Hallows in 2007, and the fastest-selling script book ever.”

“We’ve had an unprecedented response to the release of Harry Potter and the Cursed Child with our biggest first day sales in nearly a decade. The Harry Potter legacy is phenomenal with fans keen to get their hands on this new book as soon as possible. It has eclipsed all pre-order and first day sales since the release of the last book in the Harry Potter series, with first day sales well beyond titles such as Dan Brown’s Lost Symbol & Harper Lee’s Go Set a Watchman. Customers of all ages are excited about it and we’re expecting really strong sales right through to Christmas.  It’s definitely our book of the year.”

“As booksellers, we were a bit sceptical about whether fans would embrace a play script. We shouldn’t have been! The magic of Harry Potter burns as brightly as ever. We were astounded and thrilled when 800 fans turned up for our celebration in Lygon Street Carlton and it truly was a joyous occasion with people in wonderful outfits brimming with excitement. It also turned out to be a celebration of the printed book and bookshops. “Who said the book and bookshops were dead?” was a common remark.  It was much bigger than any of our previous events for the other books and sales have far surpassed our expectations. It will certainly go down as a highlight of my career.”

“Harry Potter and the Cursed Child exceeded our expectations. The initial rush of pre-orders on the announcement of the book in February should have been a clear sign of interest but we are a cautious bunch and watched and waited. Soon we had enough pre-orders to know that this would be the biggest book of the year. We placed the largest single title bulk order we’ve ever placed – 6,000 books. This is more than twice the size of our orders for E L James’s 2015 hit Grey, and Harper Lee’s Go Set a Watchman. But then, as publication day approached we realised we were way out and had to order more! We added another 2,000. And even then we sold out. The day after publication we placed another bulk order and three days later another. Harry Potter and the Cursed Child is a bonafide hit with readers. Reviews are great, the book is still in the press, everyone is clamouring for a copy. We are selling hundreds a day. Harry is back!”

Harry Potter and the Cursed Child Parts One and Two, a play by Jack Thorne based on an original story by J K Rowling, Jack Thorne and John Tiffany, opened at The Palace Theatre in London’s West End last Saturday (July 30) to critical acclaim. At midnight on Sunday July 31 (UK time), the Special Rehearsal Edition of the script was published containing the complete script, including stage directions, used by the original West End production during the play’s preview period.

Over 100 bookshops celebrated with launch parties in Australia at the weekend reminiscent of the earlier Harry Potter books.

In the Daily Review acclaimed local playwright Joanna Murray-Smith called the book, “moving, funny and complexly human.” The Sydney Morning Herald said, “here’s magic galore, plenty of action, moments of tension, fights, and… great spectacle in The Cursed Child” The Herald Sun described it as a “grand reunion with old friends” and said “you won’t be able to put the book down until the final twist.”

Harry Potter and the Cursed Child – Parts One and Two is the script book of an original new story by J K Rowling, John Tiffany and Jack Thorne, and is a new play by Jack Thorne written to be enjoyed on stage.

The Special Rehearsal Edition of the script book (hardback, £20) was published at 00.01 on 31 July 2016, following the play’s opening in London’s West End on 30 July, thereby bringing the eighth Harry Potter story to a wider, global audience. The script ebook was published by Pottermore simultaneously with the print editions, in collaboration with Little, Brown Book Group in the UK, and Scholastic in the US and Canada.

Following rave reviews, Sonia Friedman, Colin Callender and Harry Potter Theatrical Productions, producers of Harry Potter and the Cursed Child, recently announced that a further 250,000 tickets will be released for sale tomorrow (Thursday 4 August 2016) at 11am BST, booking through to 10 December 2017.  Tickets are priced from £15 per part and for every performance there will be 300 tickets at £20 or less per part. Box Office – 0330 333 4813 www.HarryPotterthePlay.com

J K Rowling is the author of the bestselling Harry Potter series of seven books, published between 1997 and 2007, which have sold over 450 million copies worldwide, are distributed in more than 200 territories and translated into 79 languages, and have been turned into eight blockbuster films.

She has written three companion volumes in aid of charity: Quidditch Through the Ages and Fantastic Beasts and Where to Find Them in aid of Comic Relief; and The Tales of Beedle the Bard in aid of her children’s charity Lumos.

In 2012, J.K. Rowling’s digital entertainment and e-commerce company Pottermore was launched, where fans can enjoy her new writing and immerse themselves deeper in the wizarding world.

Her first novel for adult readers, The Casual Vacancy, was published in September 2012 and adapted for TV by the BBC in 2015. Her crime novels, written under the pseudonym Robert Galbraith, were published in 2013 (The Cuckoo’s Calling), 2014 (The Silkworm) and 2015 (Career of Evil), and are to be adapted for a major new television series for BBC One, produced by Brontë Film and Television.

J K Rowling’s 2008 Harvard commencement speech was published in 2015 as an illustrated book, Very Good Lives: The Fringe Benefits of Failure and the Importance of Imagination, and sold in aid of her charity Lumos and university–wide financial aid at Harvard.

In addition to J K Rowling’s collaboration on Harry Potter and the Cursed Child Parts One and Two, she is also making her screenwriting debut with the film Fantastic Beasts and Where to Find Them, a further extension of the wizarding world, due for release in November 2016. 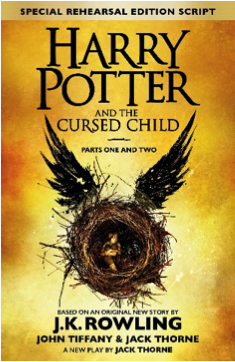