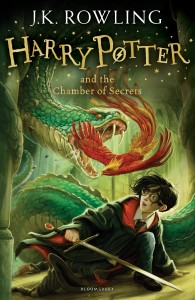 Bloomsbury reveals new children’s jacket for Harry Potter and the Chamber of Secrets.

As part of the new look for the children’s hardback and paperback editions of the phenomenally successful Harry Potter series, Bloomsbury Children’s Books has revealed the cover for Harry Potter and the Chamber of Secrets. See cover image attached.

Illustrated by award-winning artist Jonny Duddle, the jacket depicts Harry’s battle with the monstrous Basilisk. All seven new editions will be published on 1st September 2014.

Jonny Duddle is best known for his award-winning picture books, including The Pirate Cruncher and The Pirates Next Door (winner of the Waterstones Children’s Prize and shortlisted for the Roald Dahl Funny Prize). He has a background in the computer games industry and is highly skilled at character development. His work has appeared in Aardman films and Terry Pratchett novels.