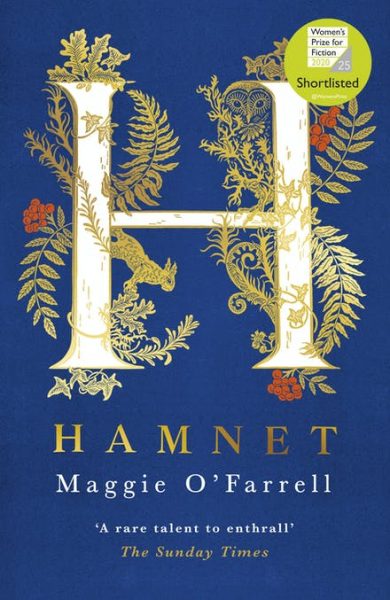 A Review by Emma Streeton

The book begins with an eleven-year-old Hamnet running around town looking for his mother or a doctor or anyone to tell that his twin sister Judith is very ill. She has a fever and there are lumps on her neck, a revealing sign of the bubonic plague. He can’t find anyone to help so Hamnet lies down on the bed beside her. This opening engages the reader in the drama from the outset. O’Farrell continues to deliver throughout this novel.

I must confess that I am a big Maggie O’Farrell fan and have read many of her previous books. This is not her first historical fiction novel. Her 2006 novel ‘The Vanishing Act of Esme Lennox’ was set partly in the 1930s but Hamnet is quite unlike anything she has written before. As always, O’Farrell’s writing and descriptions are stunningly beautiful. Fruits, animals and flowers, textures and surroundings are described in sumptuous detail that enhances the story. The reader feels as if they are right there in the moment. It really is a pleasure to read.

In 1596 William Shakespeare’s son Hamnet died, cause unknown. This captivating story takes us backwards and forwards from 1580 to 1599 to the writing of the play Hamlet. In 1580 his first sight of Agnes (Anne) Hathaway transfixes our would-be actor and playwright. We glimpse his life at home with his fierce and violent father John who is a glove maker, his mother Mary and sister Eliza. Love grows between William and Agnes and what they must do to be together. We are invited to their wedding and glimpse their family life. You hold your breath as the events unfold that lead to Hamnet’s sudden death and witness the impact it has. We are in the audience at the premier of the play in his name.

I have to admit that I didn’t really know much about Shakespeare’s history or his family before reading this book. I only know of his wife Anne Hathaway because of the historic property in Stratford-Upon-Avon that I have had the pleasure of visiting on several occasions. This book greatly adds to my historical knowledge even though it is a work of fiction. Interestingly, in this book, O’Farrell never names Shakespeare.

O’Farrell almost relegates Shakespeare to the position of an insignificant though recurring character. He is referred to as the tutor, the glover’s son, a husband, a father, a brother but never by the name William or Shakespeare. This decision helps to put Agnes at the center of the story. And what a fabulous character she is. In some ways this is also where the novel falls down as Agnes is the only character in the book who is really fleshed out. The others, including Hamnet, feel more two-dimensional. Although this was no doubt O’Farrell’s intention with regard to Hamnet’s father, I can’t help but feel it lets the novel down.

At its heart, though, this is a book about grief, and the means by which people find their way through it. It is a poignant portrait of a marriage, a family and the impact that a loss can have on everyone. The scene in which Agnes washes and lays out the body of Hamnet is heartbreaking:

She grips his hand in hers. The heat from her own skin is giving itself to his. She can almost believe that the hand is as it was, that he still lives, if she keeps her eyes away from that face, from that never rising chest and the inexorable stiffness invading his body.

Perhaps with remarkable, yet coincidental, timing the book is set at the time of a plague in the late 16th century. What I found particularly clever was the small part of the book that demonstrates how a chain of seemingly random interactions can have unforeseen and devastating consequences around the world. How poignant given what we are currently dealing with in our communities.

This is a book I would really encourage people to read, whether or not you are a fan of O’Farrell or of historical fiction.  Without doubt, Hamnet will be one of the key books of 2020. Well done Maggie O’Farrell for producing yet another memorable and fantastic book.

Hamnet has already been shortlisted for the Women’s Prize For Fiction – Editor.