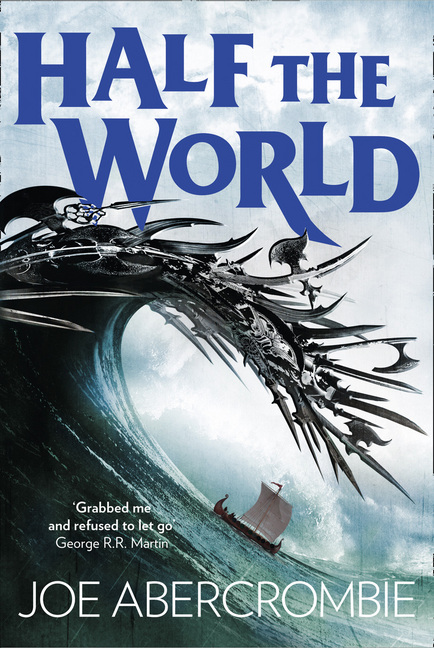 At the end of Half a King (The Shattered Sea trilogy book 1), Yarvi [spoiler deleted]. Now Yarvi is a little older and even more rat-cunning (they say “deep cunning”). Although Yarvi is enmeshed in Half the World, the primary characters are Thorn and Brand.

Thorn is 16 years old. She’s had a lifetime of her mother criticizing her for failing to be the daughter her mother wanted, a lifetime of other girls rejecting and mocking her. She’s spent a lifetime growing needles of which any echidna would be proud.

She’s also spent most of a lifetime learning to fight in pursuit of her goal to become a warrior in the face of ridicule and rejection.

The arms master sets 3 young men onto Thorn as her final “test” that he intends her to fail. One of the lads steps on Thorn’s wooden practice sword, splintering it. Thorn doesn’t realize and keeps fighting, only to splinter one of her opponents through the neck. The arms master accuses Thorn of murder so she will be crushed by rocks until she is dead. Because women shouldn’t serve Mother War. What?!

Brand approaches Father Yarvi with the truth. Yarvi saves Thorn, taking her into his service. The arms master punishes Brand by rejecting him, destroying all Brand’s hopes and dreams.

Thorn and Brand are complex characters with backstories affecting their personalities, their relationships and their goals. Both are trained as warriors and tested in the field of battle.

The ebb and flow of politics is more deep and devious than the Shattered Sea itself.

A female character describing women’s breasts when fighting as “two sacks of sand” jolted me out of the story. Thorn waking up to feel blood in her trousers then putting her hand down her trousers to see how bad it was, was really bizarre. Perhaps other women’s experience is different to mine; perhaps this is another case of a man writing a female character. At least he acknowledged the female body and menstrual cycle; you have to give him credit for that!

Joe Abercrombie knows his literature. Early on I saw shades of The Scottish Play echoed through Lord of the Rings into Half the World. The far future or fantasy post-apocalyptic world is familiar — Witch World by Andre Norton, Sword of Shannara by Terry Brooks to name only two — and yet Abercrombie’s is unique. I assumed his world was built on the ashes of this one but, with talk of elves and magic, now I’m not so sure. Either way, it’s an effective basis for a relatable yet different world.

I’ve read and watched the mentoring trope with similar heroes’ journeys before but Abercrombie’s tale is effectively woven, ensnaring me as a reader. I enjoyed Thorn’s journey as a character with whom I could relate as a teenager. I loved Brand: his simplicity, his ethics and his internal conflicts. Abercrombie embraces the tropes while avoiding cliché conclusions.

Although I was impressed with Abercrombie’s The Heroes, it was rather black and bloody for my taste. Half a King and Half the World are much more to my taste. I highly recommend The Shattered Sea trilogy. So far.