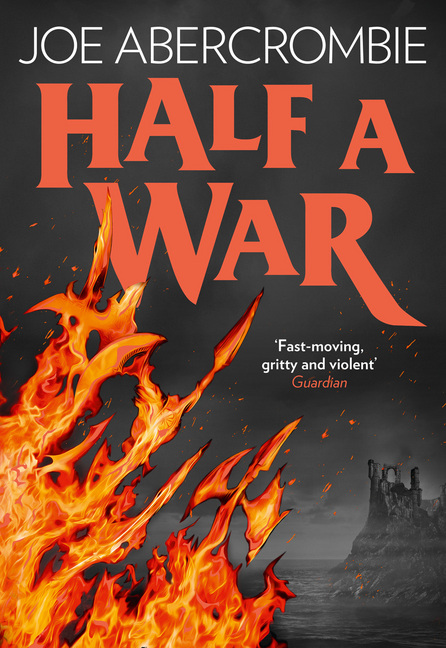 Lord Grimdark has done it again. He concludes his YA/adult crossover trilogy with a bloodbath and darkly realistic international politics.

OMG, I have summed up an entire book in one sentence. But, because it’s expected, I’ll waffle a little more.

In Half a King, the first book in this trilogy, Prince Yarvi is about to enter the ministry to serve his country when his father and older brother are murdered. His power-hungry mother places Yarvi on the throne although, in this warring society, he’s considered half a man and half a king because his left hand is deformed, with only a thumb and one finger.

War and treachery cast Yarvi from his high status to a slave rowing on a ship, not unlike Ben Hur. From there he must escape to fulfil his vow of vengeance.

Half the World sees Yarvi, with other central characters including a kick-ass female warrior, travel half the world to further Yarvi’s agenda and that of his country. The High King who murdered Yarvi’s family is out for revenge against those who continue to flout his rule, defy his new One God in preference to serving a pantheon, and refuse to pay their taxes. Unknown characters reveal themselves and develop during the course of this story.

Half a War is the climax of this trilogy, seeing vengeance, battles and betrayal. Power corrupts. Deep cunning cuts both ways. Love and loss abounds. Although Abercrombie has built a patriarchal society with a traditional division of labor between the genders, women have power, flout tradition and advance their agendas.

Yarvi is disabled and yet he’s central to the Shattered Sea Trilogy and pivotal in Half a War. He’s not the idealistic youth he was a few short years and a few short (?) books ago. His disability is still mentioned through other people’s eyes and yet the disability is a feature like some characters picking their nose (vomit). He isn’t the sum of his disability nor is it a defining feature any longer: Yarvi’s driving force is the vow he made in the first book.

Raith is an albino-type, with his white hair repeatedly mentioned. I kept forgetting he’s supposed to have white hair from birth because he has no other features of albinism; albinism, by definition, affects eyesight. However, this albino-type I can accept because Raith, like Yarvi, is a complex character who develops during the course of the story.

Elements of the Shattered Sea Trilogy have their roots in stories like Andre Norton’s Witch World series and Terry Brooks’s Shannarah series in that this is a post-apocalyptic world where nuclear warfare has shattered the world. For nostalgia alone, bringing these stories of my teen years into the 21st century, I have to love the Shattered Sea Trilogy.

Overall, Half a War is grim-dark; it’s depressingly realistic and relatable to real-world politics. Abercrombie is back in his blood-and-guts element, with flashes of black humor like in The Heroes. Romance is interwoven in the narrative because it’s a part of the human story. The end of the story is satisfying and yet there is plenty of scope for more stories set in this world; this is no saccarine-sweet happy-ever-after, but a gritty installment like you’d expect in real life. Although, in real life, I’d avoid scaling cliffs, bloody battles and people bearing poison.