Click on any photo to open carousel, then use left and right arrow keys to scroll through photos. You can comment individually on photos. Press escape key to exit carousel. 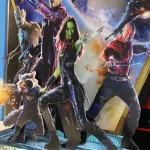 The 3D poster is my consolation for lack of GotG cosplayers 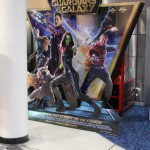 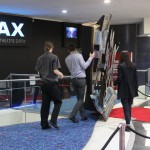 then they changed their mind… 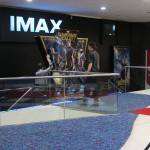 and put it right back where it was before they started. 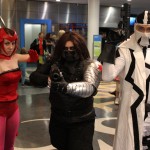 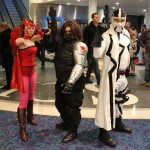 On their facebook page they say they’re doing a Rocket Raccoon build. I can’t see it, can you? 😛 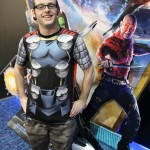 The best geek tee of the event

Anticipating a cosplay parade prior to the 17 minute preview of Guardians of the Galaxy, I arrived an hour early only to feel very lonely, standing in the foyer with only a handful of geeks & nerds.

Entertainment was provided by IMAX staff moving the Guardians of the Galaxy 3D advertisement from the landing on the stairs to the foyer… and back to the stairs once more. It could only have been better if I’d caught the whole thing on film, setting it to Benny Hill music. Alas, I didn’t know what they planned!

Eventually some cosplayers obligingly appeared; a trio of dedicated peeps who good-naturedly posed for photos.

Some other dudes appeared wearing all black and carrying small toolboxes. After looking them over I thought they were staff but later I realised they were possibly in cosplay too – if so, I’m disappointed I didn’t ask for a photo.

I wandered down the red carpet, collecting my ticket before descending into the cinema-entry foyer to console myself with photos of geeks in geeky tees queuing to get in to the cinema but – alas! They’d already been allowed in to find seats. It really wasn’t my day for photos.

Finally I found a seat and waited with all the geeks.

Ryan, the dude sitting next to me, was talking to a friend, enthusiastically inflating Disney’s reputation on the basis of the impending Star Wars movies. I couldn’t resist – I commented on his premature assessment. We started chatting about Star Wars, the original trilogy, the prequels, George Lucas becoming a joke and Ewoks replacing Wookies in episode VI because MERCHANDISING. There were a few times Ryan paused and looked sideways at me before responding. I had a sense of “Wait, what? but you’re a girl – you’re an OLD girl! How would you know?” to which I just smirked because GIRLS ARE GEEKS TOO.

The minion finally showed, the lights dimmed, a short speech was made welcoming us to IMAX‘s special screening and the show began!

This chunk of a movie skipped the credits so it was pretty much all story.

Peter Quill (Chris Pratt – Emmet, Lego Movie), Gamora (Zoe Saldana – Uhura on Star Trek), Rocket Raccoon (Bradley Cooper – Face on the A-Team), Groot (Vin Diesel – voice only ) and Drax (Dave Bautista – Chuck, Scorpion King 3) line  up for their mug shots while some overweight pencil-pusher discusses them with his colleagues. After processing, the convicts are shipped to the Kyln, a maximum security prison in this far-future universe, where they promptly jump from the frying pan into the – er – kiln.

Hostility from longer-term residents inspires collaboration between the newcomers. Rocket Raccoon is the brains of the bunch, telling the others what he needs to McGyver their way out of the prison. Only problem is, while Rocket elaborates, Groot acts… a beautiful scene that had me holding my breath, knowing there was going to be a punchline leaving me laughing.

Without giving a scene-by-scene description of this too-short short, let me just say the audience laughed, the audience cheered and, when it was over, the audience said ‘OhooohOOOh’ in unison, a crowd of disappointed children. It was the Star Trek Into Darkness preview all over again.

It’s a little disappointing that, with a core group of 5 characters, only one is a woman. Guardians of the Galaxy won’t pass the Bechdel Test, mark my words! However, Gamora is a kick-ass woman who handled herself well in combat with no sissy-fighting or ground given on basis of her gender.

Vin Diesel is great as the voice of Groot but I’m a little disappointed to miss his face, abs and tush. I’d kinda like him as Drax but I suspect I’m going to love Dave Bautista as Drax and in similar roles in the future. Drax seems intelligent but it’s a ‘feature’ of his species that he can’t understand metaphor. This was hilarious. I anticipate more!

In my opinion there are three main types of successful comic book movies.

Guardians of the Galaxy hits number one, the action/comedy movie genre, square on the head of the nail. It’s a great action/comedy movie with excellent special effects and brilliant 3D (the minion LOVES the 3D!). I anticipate a box office smash, watching it at IMAX (pretty please) and then the minion laying his grubby little mits on a bluray copy even if I don’t receive one for ‘review’ purposes. If Marvel follows through on a very promising start, Guardians of the Galaxy will be a family favorite.