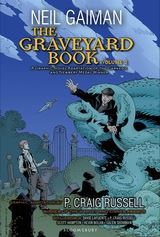 Recently I received and reviewed The Graveyard Book graphic novel volume 1; now I’ve received volume 2 so the story is complete.

Nobody Owens, called Bod, is growing up fast in the graveyard with his adoptive parents and Silas, his guardian, trying to keep him safe while Bod whiles away his days and nights with spectral playmates and learning.

The man Jack who murdered Bod’s family is still hunting him, making leaving the graveyard, even to go to school, a very risky proposition. To make matters worse, Bod takes an interest in other students, standing up to a bully. Being noticed becomes a certainty.

Scarlett, Bod’s childhood friend, returns to the graveyard from overseas only to encounter danger.

P Craig Russell adapted Neil Gaiman’s The Graveyard Book into a graphic novel with illustrations in volume 2 by David Lafuente, P Craig Russell, Scott Hampton, Kevin Nolan and Galen Showman. As I only relatively recently acquired my desktop magnifier that allows me to read small print and enlarge pictures, I haven’t much experience with comic books and graphic novels. Thus I found it disconcerting when every chapter seemed to be illustrated in a different style.

This was an interesting exploration of comic book and graphic novel culture. I preferred one artist’s depiction of Bod appearing mischievous and precocious; early drawings of Silas from volume 1 were my favourites while late drawings of the Owenses, textured and pensive as their little boy was growing up and would shortly leave them, were the best. I’ve talked to an editor-in-training and long-time comic book fangirls who understand the culture. They bestowed awesome fangirlsplains to this newbie because ‘we’re fake geek girls’.

A deceptively simple story told with words and pictures, The Graveyard Book volume 2 harks back to mythology whilst also looking at childhood and childish wants. Highly recommended for those who want a good story, who love graphic novels and for those who, like me, are dabbling their toes in the relatively undiscovered country of graphic novels.