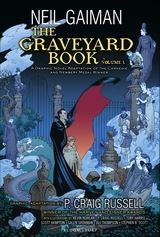 In the dark of the night, the man Jack slit the throats of two parents and one child. He refrains from smiling until the job is done because he’s a professional. Jack seeks the remaining family member, a toddler, to no avail.

The toddler, like so many others before him, was the despair of his parents with his inclination to wander now he’s found his feet. Tonight, the toddler wakes and wanders off to a graveyard where the vampire Silas and some ghosts save him from the man Jack. The toddler’s mother begs them to care for her baby before she vanishes, doomed to haunt a different graveyard. A childless woman-ghost wants to care for the toddler.

The graveyard is in an uproar.

The woman Death from Gaiman’s previous works visits the graveyard to settle the dispute. Silas names the toddler ‘Nobody’, which becomes ‘Bod’ for short. Silas becomes Bod’s guardian while the Ghosts Owens become Bod’s parents. At first Bod’s relationship with Silas seems really creepy but they develop an intriguing complex relationship.

Bod starts as a toddler too young to speak until, at the close of this volume and after several adventures, Bod is about 10 years old. Men are still after Bod but we’re not told why; this story arc is building.

The narrator is incredibly unreliable, often seemingly in third person with Bod’s voice and point of view although periodically skiving off to visit a ‘Duke’, a ‘Pope’, and so forth, before Bod meets them. Thus we learn about Bod’s world where Night Gaunts fly through the sky and Hounds of God stalk little boys in graveyards. Silas remains a mystery with his classical vampire cloak and frequent absences from the graveyard; I’m sure Silas will shed light on Bod’s story when Bod is a little older. Or in more danger.

Bloomsbury has classified The Graveyard Book: graphic novel volume 1 for ages 9 to adult. If you absolutely must let the children read it, I recommend keeping a pristine copy for your collection because the rug rats will probably read the Graveyard Book into battered oblivion. I love this book: story, pictures and all.