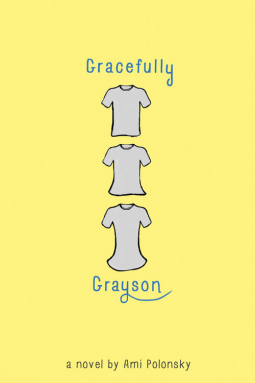 Grayson Sender is in grade 6 in Chicago. He’s isolated from his peers because he has an enormous secret that is eating him up inside: he identifies as a girl. Gracefully Grayson is the tale of Grayson’s emergence from the closet, partially made possible by discovering his past, lost because his parents died when he was 4 years old.

Gracefully Grayson is a one-issue story set in a realistic world in the present era.

The children at school are surprisingly mature for their grade; Grayson and his peers felt a few years older to me but the reading level is aimed well at primary to middle school.

Although mention is made that Grayson’s English and drama teacher is gay, Gracefully Grayson seems to go out of its way to avoid engaging with Grayson’s sexual preferences, strictly limiting to talking about his desire to be a girl. The drama, the Myth of Persephone, talks about Persephone’s mother, not her lover, Orpheus, rescuing her from Hades. This was probably to avoid opening a whole can of worms but seemed a little odd; after all, the leading couple don’t have to actually couple-up. Nor, in a middle school play, should children be expected to kiss one another.

Gracefully Grayson is a thoughtful, interesting novel aimed at primary to middle school students. It was slow to start, with Grayson obsessing about his secret for too long. The novel focuses on one issue only — gender preference — with other people’s reactions to Grayson’s emergence; during this phase (acts 2 and 3) the cast expands and characters develop relationships. I enjoy issue-based novels but I feel such novels benefit from a panoramic view rather than a blinkered focus on one topic. However, I admit to a moist eye towards the end. I’m giving Gracefully Grayson 3 stars.

My opinion may be a little harsh; other people have raved about this novel.

“Tenderly and courageously told, Gracefully Grayson is a small miracle of a book. Its story is so compelling I found myself holding my breath as I read it and so intimate I felt as if what was happening to Grayson was happening to me. Thank you, Ami Polonsky, for creating this memorable character who will open hearts and minds and very possibly be the miracle that changes lives.”

– James Howe, award-winning and best-selling author of The Misfits

“Don’t be intimidated when I say that “Gracefully Grayson” is an important book.
(It is.) It’s also a brave, exhilarating, heart-stopping, roller-coaster ride of self-discovery that will leave you cheering.”

Note: I refer to Grayson as ‘he’ because that’s the gender used throughout the novel. Also, Grayson didn’t seem to like being called ‘Gracie’ although I thought ‘Gracie’ would have made a good transition name.