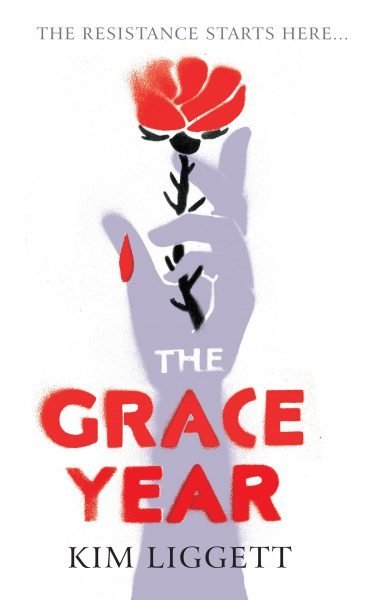 In a restrictive society where women’s appearance and every movement is restricted, Tierney is turning 16. For this year, her ‘grace year’, she swaps a white ribbon for a red ribbon on the braid she must wear for her entire life. She and all the other girls of her age will leave the community and live in exile, hunted by poachers. If the poachers catch them, the poachers will torture them, kill them and bring their bodies back in jars to be consumed as a precious medicine. Most girls aspire to be betrothed before they leave and to return to husbands. However, Tierney hopes to work on a farm.

There are more girls than boys so the inevitable deaths that occur during this traumatic year serve to reduce the excess female population.

On the road, Tierney leaves the path to urinate behind some ferns. A poacher catches her but lets her go.  Afterwards, she tries not to leave the path.

When they arrive at their destination, Kiersten, a vicious ‘queen bee’, takes charge in a situation that seems more Lord of the Flies than the Handmaids Tale. With poachers outside the fence, Keirstyn inside, a ghost, winter imminent and their drinking supply looking unhealthy, Tierney has her challenges cut out for her. The Grace Year also has a dash of Shyamalan’s The Village in its isolation and artificial constructs with the chosen wearing red while seeking a solution.

The Grace Year versus disability

All the women bear scars from the grace year, whether it’s a missing fingertip, missing the four fingers on one hand, facial disfigurement or burns. It’s not until Tierney arrives in the camp that she learns why. Tierney acquires her own disfiguring scar so it appears Liggett’s use of disability is intended to reflect the destructive nature of society, the destructive nature of the patriarchy and of women pitted against one another. Liggett does not seem to use these scars to symbolise internal corruption.

Although Liggett uses disability to further non-disabled interests, I feel its use is appropriate. Appropriate because my disability is not my poor eyesight. My disability is the barriers that people place around me and the violence people have inflicted upon me because I am different. Violence they inflicted because they decided I am inferior. So it’s ok for a professor to assault me. It’s ok for the University of Canberra to destroy CCTV footage of that assault. It’s ok for police to refuse to act when I reported the assault. Etcetera. I relate to Liggett’s brutal rendering of society.

The Grace Year versus race

The central community is comprised of groups of people who came together with variety of languages. Liggett specifically states that they all ended up using English, which is white colonialist and disappointing. There was no need to name the common tongue. However, there is no apparent racial conflict in the novel, only class and gendered warfare.

The Grace Year is a riveting novel speaking to contemporary social issues while weighing the costs and benefits of conflict versus collaboration. The ending is satisfying although I believe that, in reality, things would’ve been much worse. But then this novel would not have been a dystopian young adult novel and instead become a horror story. I’m glad Liggett opted for dystopia instead.

If you enjoyed Daughter of Lies and Ruin, I recommend The Grace Year. Because you’re switched on and enjoy kick-ass women characters who break the rules.