I have no idea who “We’re gonna need a bigger cup” is for. This card was a reaction to finishing my rocking card AND LEARNING THE SHARK WON’T ROCK WHEN THE CARD ROCKS. Damn! All those hours and hours spent making that card and it only half works!

This card was quick, easy and fun. Plus I got to try my Distress Glaze for the first time (on the coffee heart and droplets going upwards plus the sentiment) and it’s fun. Did I mention it was fun?

Because it’s 2020 so EVERYONE NEEDS MORE FUN. 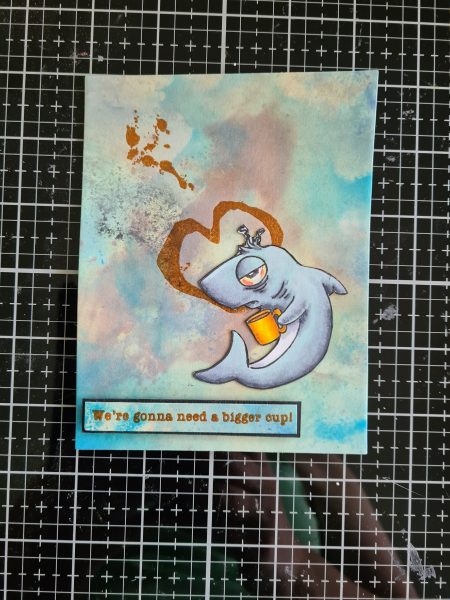 After finishing the rocking card, learning that the card rocks but the shark only moves if I move it with my hand (SIGH), I had just about all the supplies I needed all laid out on my table.

I found a sheet of ink-smooshed paper I made LITERALLY several months ago using Tim Holtz distress oxide inks. It looks like water with either blood or coffee floating in it. Or, at least, that’s what I think. I cut the background out, choosing a section with LOTS of the blood/coffee.

After using my anti-static tool, I stamped the heart and droplets from Altenew’s Coffee Break stamp set with Versamark ink then used Tim Holtz’s distress glaze in rusty hinge, which I think is a nice coffee color. It could be black coffee diluted with water or very strong latte or something.

I did the same to the sentiment.

And, of course, heat-set both with my heat tool.

Rabbit Hole Designs has a series of cute tired creatures drinking coffee and I AM COLLECTING THEM ALL. Because coffee. And fun. Anyhoo, this is the first I’ve used. It’s Caffeinated Shark, which I stamped using Hero Arts Intense Black Ink (because it’s Copic safe) then I colored the shark in with my (you guessed it) copic markers.

I trimmed the sentiment down and mounted it on slightly larger black “premium” cardstock from Kaisercraft.

Without the die or a Scanncut (my Christmas wish), I fussy cut the shark out. If I had either the die of the Scanncut, I probably would have done three and layered them together for dimension. But I am SO NOT fussy cutting that out three times. Not after I did so much fussy cutting on the rocking card over the weekend. I’m done.

If you’ve been following me for any length of time, you’ll know this heading has nothing to do with religion, a political stance or a lot of rules.

I used Tombow Mono Multi Glue to glue the shark to the background and the background to the card proper. However, I used double sided foam tape to adhere the sentiment to the card so it is popped up a little. After taking this photo I used Glossy Accents on the shark’s eye. When it dries, it will be clear (it looks a bit like the shark has cataracts until it’s dry) then the eye will have more dimension too.

And that’s all she wrote!

Thanks for joining me and especially for reading this far (you’re a champion). Stay safe. Take time out to look after yourself and your loved ones.

I’m gonna need a bigger cup to cope with the coming days.