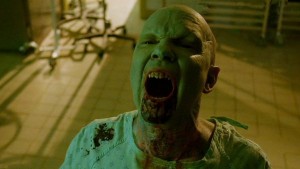 Captain Redfern, the airplane pilot, is the only survivor in quarantine; he’s submitted voluntarily because he feels unwell. Eph (Corey Stoll) and Nora (Mía Maestro) are caring for him to the best of their abilities but they’re confounded by the progression of the disease.

Fet (Kevin Durand) is sent chasing rats, prioritizing the wealthy elite over minor concerns like health and eating establishments. Late in the episode Fet observes a scene that is both funny and scary, a portent of things to come.

Eph investigates the dead child’s reappearance at her home where all is not well.

Setrakian (David Bradley) faces court as a suddenly frail old man whose mind wanders. After his release, Nora chases him, seeking answers. Setrakian says she must become sufficiently desperate to follow his instructions. Nora argues with Setrakian. Guess how that conversation goes.

Jim Kent has a throw-down with his puppet master about the box, revealing his motives.

I’m not sure what is meant to have ‘Gone Smooth’. Certainly not stuff for the good guys who are confounded at every turn.

At this point my favourite character is Setrakian; I hope he stays strong and surprising. Nora needs development beyond being Eph’s side-kick and lover. Eph is kinda sympathetic; his character has depth with the family issues, but he’s just another dad too invested in his work, too self-absorbed to really care about those around him while he’s proving himself to the world. Viewers have an inkling of the stakes and Eph, as CDC-guy, anticipates a virus-like catastrophe. Eph is the key agent who can save the city or the world making Eph more sympathetic than he could be while letting his son down. Kudos to Eph for manning up, accepting his former-wife’s lover, but I felt that didn’t ring true, not so soon.

Complex story-lines and true-to-life characters challenged by circumstances beyond their experience make The Strain an engaging story. The Strain is darker than Joss Whedon’s TV series Angel and Buffy with elements of House of Cards thrown in. The vampires are creepy, threatening and original. I’m hooked.