A commentary with spoilers, snark and very bad puns by Edward and Nalini Haynes

Ichy is obsessing about his son and why his wife didn’t tell him she was pregnant. I wonder why he assumes that she knew she was pregnant considering she wasn’t big enough for him to notice before he died. I assume they were getting up close and personal, having the sexytimes, because, y’know, SHE GOT PREGNANT. It’s not like he’s worried that it’s anyone else’s baby.

And Boromir’s father Denethor — aka Henry Parrish (John Noble) — is back. He objects to Ichy touching him. Icky wants Henry to summon his son. Because that will go well.

“A mortal soul has no place in the realm of the dead” says Henry. Or was that “immortal soul”? Just because Ichy came back from the dead doesn’t mean he’s immortal, it just means he’s not dead again yet.

Henry capitulates rather quickly. And tells Ichy to think about his wife. Then Henry throttles him. Abbie stands there and watches.

Ichy sees a room, hears a babe cry, races to the pram to rescue the babe only to find a poppet but no baby.

Katrina appears. She says their son’s name is Jeremy. She says she didn’t know she was in child when she buried him and nor did her coven. Her coven wanted both Ichy and Katrina. There’s a lot of telling in these stories even with the visuals. The story suffers for it, distancing the viewer.

Now, instead of Moloch imprisoning Katrina from Death, it’s Katrina’s coven who imprisoned her. Sleepy Hollow writers need to get their story straight.

The golem breaks down the door and Katrina sends Ichy back to the present.

The golem appears near the island where the dead colony lived. Because that makes sense.

Ichy realizes he could have as many as 6000 offspring, assuming, of course, that his son wasn’t killed before having kids. This doesn’t seem to have occurred to him.

Henry is getting antsy and OCD so he’s pulling on gloves and arguing about leaving.

Abbie talks. A lot. At Henry. She convinces him to stay a little longer. For an OCD dude he’s flexible.

The golem looks a bit like an Orc so I guess he’s after Henry not Ichy.

Minion says, “At least it’s not an albino Uruk hai.” I roll my eyes.

Irving gets melodramatic about his back-story while talking to a priest who tells him to have faith in the Lord’s plan. Irving wants to know who the plan is for: God or him.

Ichy wants to kiss Abbie under the mistletoe but she just smiles and shakes her head.

Jeremy had magic powers that resulted in his foster family’s home burning down, killing Abbie’s ancestors. Obviously they had kids who escaped but this seems toe escape Ichy and Abbie’s notice.

They chase the librarian because Henry says she’s lying. She screams. When they rush outside they find her corpse. I guess she had an appointment somewhere else… she’s been elected to a higher parliament.

Irving says sorry to his ex who says that she wouldn’t have kicked him out if he’d said sorry a year ago. That’s helpful.

Henry rabbits on about how good puzzles distract you, leading you in one direction, before going in another direction. Wild guess — he’s “foreshadowing” this story? Bahaha.

Ichy and Abbie banter about language.

Henry says THAT box holds hate. Turns out the librarian was a witch.

They find a child’s sketch of the poppet in a book in the box in the house that Jack built. Or the librarian’s office, anyway. Henry says the priest who ruled the orphanage beat Jeremy until Jeremy bled onto his poppet, activating the golem. It’s a very melodramatic drop of blood hanging from his nose, more like red snot dangling than blood dripping.

Ichy felt the golem follow him back, Henry said he knew something like this would happen, SO WHY DID YOU DO IT? [eyeroll]

Irving takes his wheelie pretty daughter for a stroll while talking about life. Irving goes to buy his daughter a hot chocolate and the vendor is possessed. As are other passers by. The colored contacts and spooky voices are clues.

Ichy takes the blame for Jeremy because “I brought his rage into the world then and now”.

“Moulded from clay!” The answer is the bible. Again. How convenient.

Abbie sees a vision with four veiled women…. The story is very complicated without following a logical trail to get us to this point. Either “ah ha!” moments or leaping over gaps in knowledge and we’re at a carnival.

Minion says, “All they need is clowns and then it’s truly evil.”

Abbie lets Ichy go alone so he can whup some ass but I reckon he’ll get his ass whipped.

Their tent is signed “the four who speak as one”

They have pointy teeth, pale faces and too-red lipstick. They look like vampires not good witches.

They say they’ll die tonight. They’re smoking. That must be some dope dope.

…. And we go back into another montage, narrated by witches this time.

Suddenly the empty carnival has people running and screaming from the golem. Where did the people come from? Perhaps the budget is so small they could only afford half a dozen extras for one scene.

The golem walks through the fun house mirrors. Ichy ends up with a huge shard of mirror in his chest.

“Your son’s blood is your blood. Your blood can stop it.” Because there’s absolutely no genetic difference between a father and a son, riiiiight.

Ichy stabs the golem in the belly with the shard of mirror without injuring himself. Amazing. And oh-so-surprising.

Minion: “That was a gut-wrenching scene. Why couldn’t he let it kill the witches first?”

Me: “Why did it go after Ichy and not the witches?”

Henry is happy to have helped Ichy put the golem and his son to rest.

It’s a denouement full of sugar. PASS THE INSULIN.

Abbie walks away then Ichy ends up in the mirror to confront Moloch because Moloch is, once more, Katrina’s captor.

Molloch is coming for Abbie’s soul and says Ichy has to deliver it to him.

Minion, sounding flat and uninterested although watching Sleepy Hollow had been his idea: “Yay. That was taking itself a bit too seriously.”

I think he yay-ed the end of the episode rather than the story. 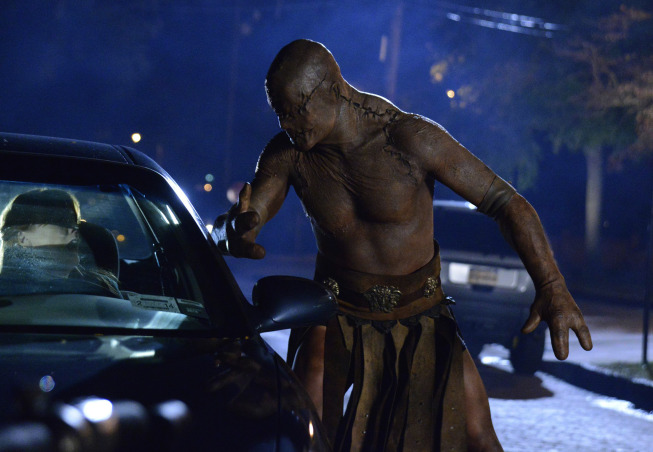