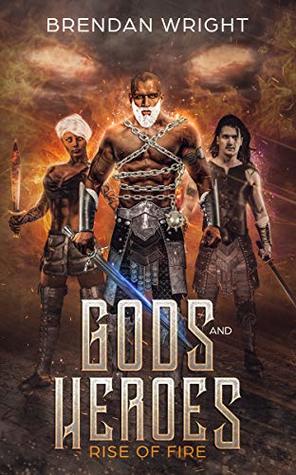 A Review by Annabelle Lee

Gods and Heroes: Rise of Fire is the first book in a fantasy series written by Australian author Brendan Wright. It is set in the fantasy land of Pandeia, which is an incredibly diverse landscape. It features huge cities, vast ash coloured desert, immense mountain ranges and massive ancient forests. You get the idea, it’s not a small place.

True testament to it’s size is the diversity of the people who live there. The story follows a collection of characters, whose journeys interweave throughout the novel. They are each from one of three opposing cultures; power hungry nobles, peaceful forest dwellers, or violent desert nomads.

After thousands of years of silence, the Fire God is reawoken by the deliberate actions of men seeking power for themselves. Much like the element, the Fire God seeks only chaos and destruction. As his devout followers gain new strength and carnage unfolds, only a few are willing to stand against them.

In many ways, Gods and Heroes: Rise of Fire is your classic fantasy novel. You have heroes in different shapes, sizes, genders and sexual orientations. Some of the heroes make less than ideal choices at times, some grow into themselves and find their courage. Still others aren’t really heroes at all (but you can have fun trying to figure out which ones they are).

Diversity is the key

The diversity of the characters is the key that makes this book a great read, and the intriguing insight into totally different ways of seeing and approaching the world based on their unique cultural backgrounds. Wright has put crazy detail into making the fabric of these cultures rich and textured. They each have a language of their own (much like Tolkien, but always explained so you can understand) and totally justifiable but opposing world views. It sets up a fascinating conflict as characters cross into other regions and seek acceptance in a place so contrasting to their own homes. Likewise, some characters stay within their own tribes but struggle to belong. These themes of acceptance and rejection run right through the book and strengthen the connection you feel with the characters.

If you’re anything like me, you may struggle to remember the names of the characters because there are quite a lot of them, and their names are not standard real-world names. I ended up just recalling the features of each person (for example, their particular type of magic or vendetta), which remained consistent, so it wasn’t hard to keep up.

Because the story moves between quite a few different locations and characters, at the beginning it was a little overwhelming. However, after a few chapters the story begins to feel more familiar. It’s absolutely worth reading for the well developed twist near the end in which suddenly everything makes sense.

Gods and Heroes: Rise of Fire is a gripping and complex novel with layers of intricate details that shape this fantasy world. Exploring the distinct cultures through the eyes of various relatable characters draws you into the story as you seek to untangle what it is that makes a hero. For adults who enjoyed Lord of the Rings, A Song of Ice and Fire or any other epic fantasy series, but want something not as long (or long-winded), this book will be very enjoyable. 4 out of 5 stars.

Disclosure: the author of this book is a friend of the reviewer.