*amendment: initially I said Adam Hills of The Last Leg was one of the creators of Glitch; apparently it was a different Adam Hills. My apologies. I still think Glitch is a great TV program.

Back to your regular scheduled review:

I haven’t seen SFF of this quality to come out of Australia since Farscape although, be warned: Glitch has a totally different flavor, it’s more Firefly but with small-town drama instead of Western elements. Also, it’s a science fiction TV series for a broad range of people, not just teenagers and young adults. YAY.

It’s evening in Yoorana, a fictitious country town near the real-world town of Shepparton in Victoria, Australia. There’s been a disturbance reported at the local cemetery so a copper, James Hayes (played by Patrick Brammall who needs an IMDB profile) investigates. James finds confused mud-covered naked people wandering around the cold and dark. He assumes drugs were involved and calls the ambulance, which doesn’t arrive but the local doctor, Elishia Glass (Genevieve O’Reilly) shows up instead. Between them, they round up the naked now and cart them off to the medical centre.

However, they miss a couple of people. One of those people, an Irishman named Paddy (Ned Dennehy) teams up with Beau Cooper (Aaron L McGrath who also needs an IMDB profile) in spite of Paddy’s racist rantings and assumptions. As a 16-year-old Aborigine, Beau is an easy target for blame and a magnet for police attention, just like you’d expect in real life. However, he isn’t entirely innocent in this story: Paddy leads him astray.

The naked people rose from the dead. No-one knows why or how, that’s part of the mystery as is who the people are — the trauma muddies their memories as well as their bodies.

Through these characters we see how much the world has changed since their deaths and we explore their unfinished business. Philosophical issues are raised about life, death and morality. How a loving husband reacts when his terminally-ill wife isn’t dead any more is not unlike a terminally-ill person living past their ‘use-by date’. How does a good man cope when he’s in love with two women?

Historical and present-day racism comes to the fore with Paddy and Beau, taking unexpected twists and turns.

After watching a few episodes the minion started hating on one character, torn between deriding her acting or her character’s plotting. The entire production is of such a high standard that I held off judgement until the end of the season, by which time mystery deepens around that character although there may be a bit of a plot-hole in something she did. Next season will tell.

If Glitch isn’t renewed and the story taken through to its conclusion, either on screen or in book form, I will hunt down those responsible and extract the plot from them, BY FORCE IF NECESSARY. It’s such an interesting, engaging story. Glitch‘s biggest weakness is the short season and long wait; if its programming was more like a soapy, it’d have audiences hooked for most of the year and waiting breathlessly for more. On the other hand, television series with an overload of episodes each year suffer in the quality control department so I’ll just have to be patient.

If Firefly was a mashup of science fiction and westerns, then Glitch is a mashup of science fiction and a small-town drama with elements of romance, philosophy and a large dose of mystery. I suspect later seasons will build on the mystery, raising the stakes, escalating into a thriller. So many pieces of the jigsaw puzzle look like the foundation for an intense, fascinating story: think of season 1 as Act 1 of a novel. If the series continues at this standard, it will appeal to a broad range of people while also becoming a cult hit. I highly recommend Glitch. 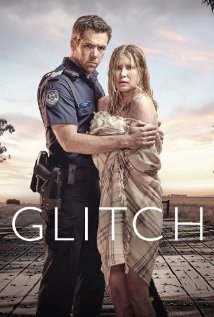