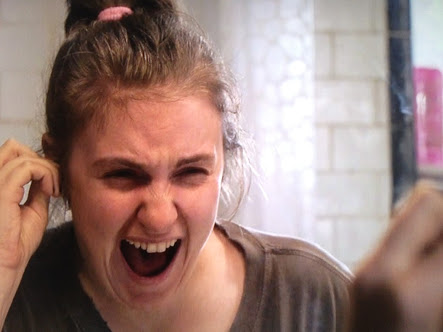 ‘She’s like a carnival game, you know? It all seems so simple but you can’t get the ring on the bottle because it’s fucking rigged so you try and try and try until you drive yourself nuts. Then, finally, when you walk away you realise you didn’t even want the crappy prize to begin with. I realise that’s what Hannah is: a giant Tweety doll I would’ve been stuck carrying around the carnival all night.’

Hannah (Dunham), Marnie (Williams), Jessa (Kirke) and Shoshanna (Mamet) return for their second season together. All is not smooth sailing for the Girls girls as they struggle together through: a honeymoon; meeting the in-laws; a divorce; sexuality confusion; intentional cocaine use (see last season for unintentional); sex with artists; sex with a married stranger; sex with a neighbour; living with a boyfriend (without realising it); an e-book deal; a deadline induced nervous breakdown; an estranged father; and a desertion.

Lena Dunham has not only created vastly different characters with depth, but she has made them likeable. Even loveable. Lena Dunham is amazing. I’m late to the party, but I’m a fan.

Throughout season one, I found myself comparing Girls to Sex and the City. That has all but disappeared in season two. Now the only comparison I would make is that in terms of being able to relate to the characters, Girls has far surpassed its predecessor. I’m not 30 yet, so of course I’m going to find it difficult to relate with a group of 30 to 40-something women who are doing well for themselves. But 20-something aspiring writer with limited income and anxiety disorders? Well, let’s just say it’s not too much of a stretch.

The men in Girls have seemed more prominent in season two and it is working well. While in season one, the fellas were mainly there for the girls to discuss, have sex with and provide background noise. This season has shown them having their own lives, doing their jobs and being responsible sounding boards to the girls.

Minor pet peeve that has nothing to do with the show itself. There are nowhere near enough trivia listings on IMDb about a show as interesting as Girls. Someone who knows things about the show really needs to get onto fixing this. That is how good Girls is. I want to know more about what is going on within the show, behind the scenes and hidden quirks that I may have missed.