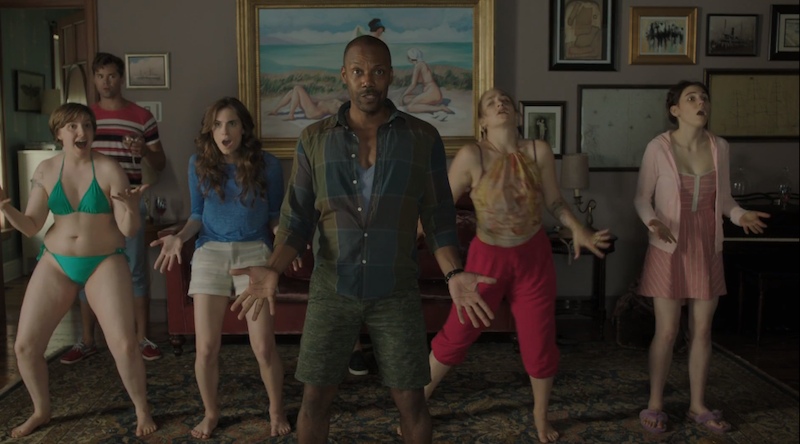 The Girls crew return once more for a third season. This year we follow Hannah (Dunham), Marnie (Williams), Shoshanna (Mamet) and Jessa (Kirke) along during: break ups; breakouts from rehab; sexual exploration and discovery; relapses; the death of an editor; the death of an ebook; a rediscovered sister; a loss of identity; a major beach holiday bust up; successes; failures; a reunited daughter; a musical career; a failed graduation; an assisted suicide; a change of heart and a call to an ambulance; and a major academic and life advancement.

I’m going to start with the negative because then we can all end on a positive note and leave happy. Just bear with me through this paragraph and it will all be love, sunshine and rainbows, okay? Okay. All of the characters in Girls have their flaws. It’s part of what makes them some of my favourite characters in modern television. I can see my own shortcomings in them and think that I may not be alone in the world. HOWEVER, Marnie is beginning to really grate my cheese. She has gone from a slightly uptight character to one of the whiniest, most selfish, ignorant, adulterous, spoilt *breath* characters I have ever seen in a television series. Long story short, if she was in The Walking Dead, I would be hoping week after week for someone to throw her to the walkers.

Okay, now that’s out of the way.

The struggles faced by the girls this season feel real. I originally started watching Girls because my other regular television shows could get a bit heavy and the comedy was a nice balance. While the laughs are still there, I need to hunt down a new lighthearted comedy because these girls can get you right in the feels.

We see Hannah try to make domestic bliss work with Adam (Driver). Jessa struggles with sobriety after getting kicked out of rehab and propositioned by a much older man (Grant) with whom she believed she was forming a friendship. Shoshanna deals with her break-up from Ray by experimenting with partying and promiscuity, as a result she doesn’t graduate with the rest of her class. Marnie … well, I don’t know … Marnie deals with the stick up her a*se or something. That’s a*s for the Americans in the audience.

In addition to characters you (mostly) love, Girls has a fun and groovy soundtrack. Did I just say ‘groovy’? I, uh, mean something that doesn’t make me sound like Scooby Doo’s gang. Either way, keep an ear out for the soundtrack while watching. Sometimes it’s very obvious, sometimes you’ll have to listen closely for a hidden gem.

‘This is how much I make in a week? This is a lot more than my rent!’