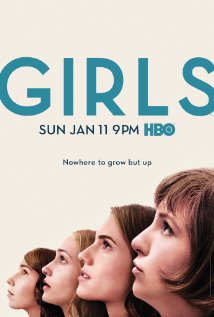 If you’re reading my review then you must be a pretty cool person so I will be honest with you. I had no intention of watching Girls. For years I assumed it was a Sex and the City rip-off that wasn’t worth my time. Early twenty-something girls? I don’t need to watch it. I lived it. It wasn’t pleasant. And this, dear reader, is why they have that expression about assuming.

Girls is, in fact, very derivative of Sex and the City early on in the series. Career wise: there is a writer who has moved to New York to live the dream and an art curator. Girl wise: there is a Carrie whose love-related escapades are the primary focus of the show (Hannah), free spirited Samantha sex-goddess who doesn’t say no to recreational drug-use (Jessa), uptight and prudish Miranda-type (Marnie) and finally the virginal and pure Charlotte doppelgänger (Shoshana).

Instead of shying away, Girls takes its derivative nature and owns it. Within the first episode, Shoshana is working out which of the Sex and the City girls Jessa is most like. The similarities soon begin to dissipate as the younger girls’ characters are developed. After the second episode in season one, I stopped comparing the girls to the Girls and enjoyed their humorous romps for their own merits.

Girls is an HBO show so be prepared to see plenty of T&A (tits and arse). I don’t recall any full frontal male nudity but I wouldn’t put it past them given the push for peckers rising in pop culture.

Lena Dunham is a comedy genius. Her writing and execution of many laugh-out-loud moments is handled like a veteran. Not content just to excel at comedy, Dunham deals with many serious issues within the span of the first season. Girls‘s humour is often a balance for the serious nature of the unintentional drug use, STIs and money problems. It works.

The first season of Girls is something everyone should try at least once. All adventurous women do.

‘I have been dating someone that treats my heart like it’s monkey meat. I feel like a delusional, invisible person half the time so I need to learn what it’s like to be treated well before it’s too late for me.’