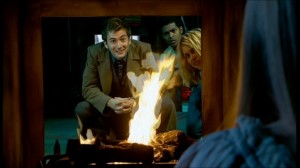 The Doctor (Tennant), Rose (Piper) and Mickey (Clarke) land on a space ship in about the 51st century; we’re back in Captain Jack’s time but no sign of the Captain himself. The choice of time zone referencing Captain Jack was the only link to Torchwood I noticed in the ‘Girl in the Fireplace’; every other episode this season has overtly referenced Torchwood.

Exploring this space ship, our intrepid crew discover the engines are powering for maximum warp but the ship is going nowhere fast. All the power is being diverted to windows in time linking the space ship to various places and times in Reinette’s (Madame de Pompadour, mistress of King Louis XV) life.

The Doctor looks through an antique fireplace to see Reinette as a child on the other side. They talk and build a relationship… then it gets creepy when she gets older and it turns into a romance; this has overtones of ‘grooming’ like with Amy Pond. The only thing that saved the Doctor/Amy relationship from being repugnant was Rory; I just wish the writers hadn’t kept playing with the boundaries between those relationships. Seriously, adult men meeting little girls then grooming them for relationships other than purely platonic friendships is NOT suitable for family viewing.

I digress. The Doctor rescues Reinette from a clockwork robot and promises to return. Whenever he looks through the fireplace or is on the France side of the time corridors, the two times seem to run in sync. However, whenever the Doctor walks away from the fireplace in the future, years pass for Reinette. Some consistency with world-building would have been REALLY NICE, people! Oh, wait – this is a Stephen Moffat episode. ‘Nuff said.

The Rose/Doctor relationship is in a peculiar hiatus during this episode. The Doctor invited Mickey to join them; Mickey is sometimes threatened, Rose is sometimes affectionate towards Mickey and yet possessive of the Doctor. When the Doctor is caught up with Reinette, Rose and Mickey morph into minor characters whose main function is theatrical tableaux between storyline scenes.

Sumptuous costumes, steampunk robots and Sophia Myles as Reinette cater to the fans who loved this zode: the ‘Girl in the Fireplace’ has 9.2 out of 10 stars on IMDB!

The minion ranted throughout this episode. Having grown up with science fiction, he values actual science fiction stories that hold together – as much as a character-driven Star Trek episode, at bare minimum. This episode catered more to historical fiction fans, romance fans and David Tennant fans than science fiction fans. I tend to agree with the minion on this one although I’m giving the ‘zode a higher rating than he would because this episode intends to deliver fan services to its target audience.