Nix Song lives on a time travelling tall ship (hence the title, the Girl From Everywhere) with her father and a small crew of misfits and runaways. Her relationship with her father, whom she usually calls ‘Captain’ or ‘Slate’, is tempestuous.

Slate is an opium addict who lives in the hope of procuring a map to take him to 1868 to save his lover’s – Nix’s mother’s – life. However, life is never simple.

When they arrive in Honolulu expecting 1868, they discover it’s 1884. They meet old friends and make new enemies, including a band of men determined to overthrow the King of Hawaii.

Kashmir is distracted, however, by the heist Slate insists they pull to procure the map of his dreams.

Nix Song, as half-American half-Chinese, is used to people doing a double take between herself and her white father. Kashmir, from a mythical Middle Eastern city, also plays the tutor to pander to Victorian sensibilities, which include racism.

Racism isn’t a significant story thread but it is pervasive, like a pebble in one’s shoe.

I am a sucker for time travel stories. This one is particularly good, not falling into the usual time travelling trope snares.

Many stories have some basis in history but this one is firmly grounded in history and myth. Hawaii in 1884 stands on the brink of destruction in the book as it did in history, with voracious white men determined to plunder its wealth.

At the end of the story, Heilig gives a brief overview of the historical setting. She also briefly outlines some of the myths she weaves into the story. The first time I recall an author providing this additional material was in Mary Stewart’s Crystal Cave series. I always appreciate this added material because I learn a little about history while separating fact from fiction. Kudos to Heilig!

The Girl From Everywhere is a time travelling romp that is above faults common to this genre.

Gradually characters come to life. Nix and Kashmir and Slate develop depth quite quickly but the other crew members emerge slowly, gaining depth over time and pages. The crew is multicultural and sympathetic even when intent on following Slate into villainy. White people are both villains and heroes.

The Girl From Everywhere is a fun romp, a romantic adventure and sail through history. I highly recommend it as an escapist read. 4.5 stars.

Read Girl From Everywhere if you enjoyed Girl in Time by John Birmingham, and if you’d enjoy Agency by William Gibson if it had a Young Adult protagonist. 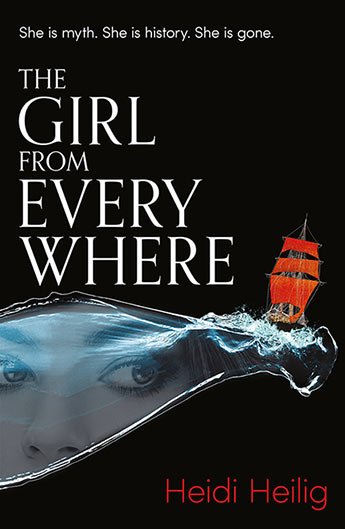