Deka has lived her whole life in a village in the North although she has her Southern mother’s dark complexion. The village is suspicious of her. And her purity test approaches. If she bleeds golden blood, she’ll be exposed as a Gilded One and sentenced to death.

The day of her test, deathshrieks attack her village. Deka shouts at them to stop and they do. Instead of gratitude, an elder cuts her to see her blood run gold. They imprison her and kill her repeatedly while draining her golden blood for profit.

Eventually White Hands, the Emperor’s emissary arrives to rescue Deka and take her to a training ground. There, with others of her kind, she trains to kill deathshrieks. But all is not as it seems…

The Gilded Ones is consciously written by an author of color to explore misogyny, repression and racism in a patriarchal society. Overtones of the battle of the sexes resound through this novel. Never fear: the author recognizes that not all men seek to oppress. In exploring feminist allies, she exposes difficulties when victims try to determine who is an ally and who is an enemy.

The Gilded Ones is high fantasy. You can’t get much higher than this. Some authors reboot legends and mythology to be plausible (or semi-plausible) “root” stories like Horse Goddess (aka Epona, the version I read) by Morgan Llewellyn. However, Forna has eschewed that trope/genre to write the battle of the sexes as mythology complete with gods and immortals. The Gilded Ones is more like Trudi Canavan’s Age of the Five books in sub-genre than the Horse Goddess although all these books delve into social issues.

The Gilded Ones is feminist fiction featuring the battle of the sexes and a chosen one in the highest of high fantasy novels. Although I prefer my fantasy tropes reversed (mythology rewritten to be more plausible), I enjoyed Deka’s journey. Forna’s exploration of social issues is revealing. I enjoyed this novel and look forward to reading more from Forna.

Read The Gilded Ones if you enjoyed Trudi Canavan’s Age of the Five. I’m surprised I didn’t review it when I read it, but here are a couple of interviews with Trudi in 2011 and 2012. 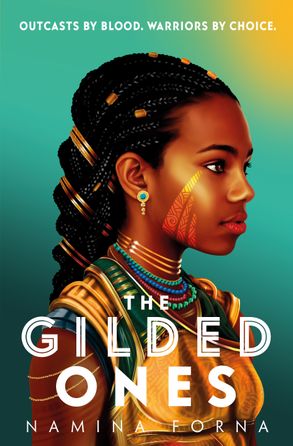