A husband-and-wife/wife-and-husband team created Gender-swapped Fairy Tales. Plackett wrote an algorithm to change male pronouns to female and vice versa. They plugged this algorithm in to some of Andrew Lang’s fairy tales then fixed some of the linguistic problems that arose. However, according to their Author’s Note, they did not fix any of the other issues even though they recognize that these fairy tales are still problematic at times.

Princes and Peas and spinning straw into gold

Andrew Lang’s version of the Princess and the Pea becomes the Prince and the Pea. I remember the first time I read the original. That being so delicate was a prized virtue hurt. My father made me sleep on a wooden surface in only a sleeping bag with no pillow when I lived with him, so I knew that I could never be this desirable creature. This was yet another message that I had no value when I read this in early primary school. Fransman and Plackett’s version flips it so the prince must be delicate. This new version served as a launching pad for a story idea. The counsellor in me totally wants to expose the disastrous nature of such a basis for marriage! I wonder how many divorced people could relate. Heh heh. I digress.

Queens rule queendoms in this collection of short stories so Frau Rumpelstilzkin spins straw for a boy then wants his baby. In my opinion, this makes a problematic story even more problematic, with the apparently childless woman seeking to steal another’s child – and no mention of the queen, whose role is purely the acquisitive greedy capitalist then exiting stage left.

Criticisms aside, I love that women are active while men take on passive (or more passive) roles in this collection.

A fly in the ointment: disability

There always has to be one annoying blow fly buzzing around, doesn’t there? This one is a white-haired red-eyed wizard with bad eyesight. Can anyone say “person with albinism”? That he features in Gretel and Hansel, living in a gingerbread cottage, only makes it worse. 1 star for representation of disability.

Fransman apparently researched historical artwork and recreated it using bolder colors as a means of modernizing the art while switching gender roles in the illustrations.

Considering the emphasis on visual representation in the authors’ note, I expected more princes with chins lifted exposing vulnerable necks and more dynamic princesses in illustrations. A lot of the illustrations are flora and fauna, incidental decoration. More illustrations please.

This lovely hard cover has a textured finish, bright artwork on the cover, vivid endpapers evoking folk art and a ribbon bookmark. The pages are unusually high quality paper, noticeably thicker than your average book’s pages. This helps the strong ink colors not bleed through, increases the tactile nature of the book, and will hopefully help the book sustain much wear and tear from repeated reads.

Generations of readers read Andrew Lang’s fairy tales. Gender-Swapped Fairy Tales reprise Lang’s tales for a new generation. Gender-swapping the stories exposes afresh problematic tropes while enabling little girls to dream of rescuing their prince. Personally, I would like these fairy tales to be more effectively edited to remove or at least challenge problematic elements. And, to be honest, I want Gender-Swapped Fairy Tales for adults. Or, at least, their sequels.

If you enjoy Gender-Swapped Fairy Tales, read The Sleeper and the Spindle. It’s awesome. 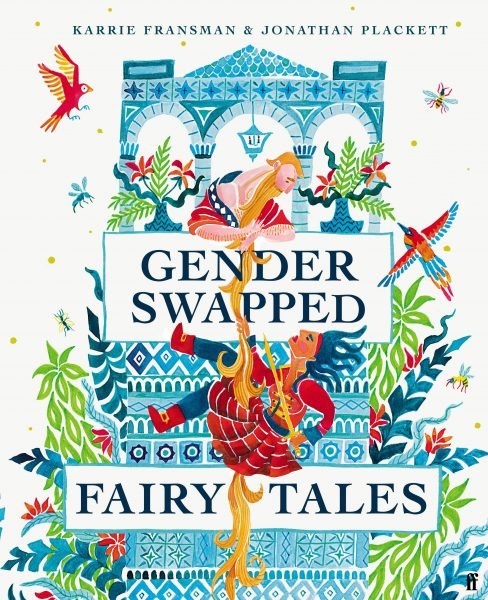