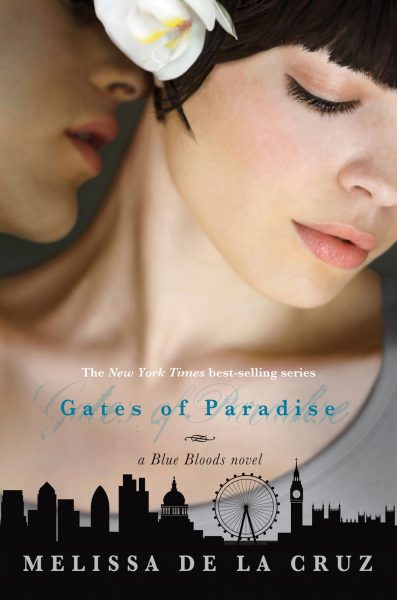 At the time the novel begins, Schuyler has had to say goodbye to her true love, Jack Force, whom she left in Egypt. Jack needed to face his twin sister and she could continue her quest to find the Gates of Paradise.

Jack’s sister, Mimi, challenged Jack to a fight to the death in the previous installment of the series, Lost in Time, after he chose to abandon her as a “bondmate” in favor of Schuyler. In the Blues Bloods series, vampiric bonding associates with increased strength and power; any breach of the sacred bond can lead to a blood trial.

Gates of Paradise opens with Schuyler and her human “conduit” Oliver at a New Year’s Eve party in London. At this point Schuyler is unsure whether either of the Force twins survived their conflict, but she’s hoping Oliver’s optimism is justified. Another character from Lost in Time featuring in this scene is Kingsley, Mimi’s true love, whom she rescued from hell. Characters believe Mimi traded her soul to do this, making Schuyler even more fearful for her brother’s life.

The narrative returns to Jack and Mimi’s perspective — both very much alive — and apparently now working for Lucifer, their former “master.” As with most other characters in the series, they have a series of different names and past lives, this time as Abbadon and Azrael, the angels of Death and Destruction.

While the additional fallen angel roles make the story more complex, the many hidden family relationships revealed throughout the series as a whole can only be described as six-degrees-of-separation on steroids. The resultant flavor also bears more than a hint of incest.

Schuyler’s quest to fulfill her mother’s legacy and find the Gates of Paradise before Lucifer escapes Hell follows a very similar pattern as in the previous books, leading some reviewers to claim this final installment lacks excitement. Readers are considerably disappointed with the deus ex machina ending for the series. This is as well as the overall story arc tying up so completely (think: Harry Potter-esque level of narrative closure).

However, there is one element of Gates of Paradise that is well worth reading, particularly for existing fans of the series. Oliver’s “cure” for his unrequited love for Schuyler, finally leads to some luck with love! In fact, at some points of the narrative he has a lot of luck. After watching him suffer for so long it is nice to see him take up his position at Schuyler’s friend again, while pursuing romance elsewhere.

The Blue Bloods novels are in various narrators’ perspectives, which is usually a good thing. Except when sections are mostly filler and don’t drive the narrative forward. This is particularly a problem in Gates of Paradise when considerable time is devoted to side plots lacking urgency and importance. The blurb of Gates of Paradise also implies that Lucifer’s daughter, Bliss, will be a central character in the text. However, much of what happens in her storyline is just setting up a spin-off series (Wolf Pact) with her and the Hounds of Hell.

The text is easy to read and, as with the previous novels, it is easy to catch up on the plot even if you haven’t read the preceding volumes. I recommend Gates of Paradise for paranormal romance readers who are fans of vampires or fallen angels. In this series they are one and the same! Suitable for young adult and adult readers.