If you enjoy reading door stops, especially epic fantasy doorstops, you’ve probably read George R R MArtin’s book A Game of Thrones that is part of the series A Song of Ice and Fire.

My teenage son read A Song of Ice and Fire after it was recommended to me and I bought him the books (I’m trying to instil a love of reading into my gamer son). It kind of back fired on me though – MTS then started nagging me to read the series. I held out for as long as I could because I was concerned about the series not being finished. After meeting GRRM at AussieCon and hearing so much about the HBO adaptation of the first book, I threw in the towel and started to read the series.

A Game of Thrones sets the scene by introducing the Stark family who rule Winterfell, a protectorate in the north of Westeros, which is ruled by Robert Baratheon (Mark Addy). Eddard Stark is the head of the family, which role is played admirably by Sean Bean in the TV series. Robert is married to Cersei Lannister (Lena Headey from the Sarah Conner Chronicles), a beautiful woman with ambitions for her family. Cersei has two brothers, Jamie, with whom she has an incestuous relationship and Tyrion Lannister (Peter Dinklage) who is a dwarf with personality plus both in the book and on the screen.

There are many other characters, too many to list here – as I said, the book is a door stop. The Stark children, all six of them, are all well developed characters with significant storylines. On this page is a picture of Bran Stark, aged 6 in the book, 10 in the series, practising his archery in the opening episode. (Art by Ben Grimshaw)

At AussieCon George said his writing of A Game of Thrones was a celebration of writing without constraints. He had been previously constrained by consideration for budgets and time frames in jobs like writing for Beauty and the Beast. As a reaction against and celebration of freedom from these constraints, George gave this series a cast of thousands, with epic sets like The Wall of ice, a massive geographical feature to the north of Westeros. Then, of course, people came knocking, wanting to turn this epic series into a movie or three. George kept turning them down, especially when he saw how much his beloved books would have to be hacked to fit the proposed formats. Finally someone, an agent I think it was, asked George what it would take. George thought about it and said it would need to be a TV series. One thing led to another, and HBO decided to make a 10 part TV series out of the first book in the series as a test run. Even in this format the book has had to be cut, but this was the best available means of conversion possible.

Previously published in Dark Matter issue 4, July 2011, blog post predated to reflect the original publication date.  Two years after writing this article, everyone is eagerly awaiting season 3 and the series has a rating of 9.4 on IMDB. 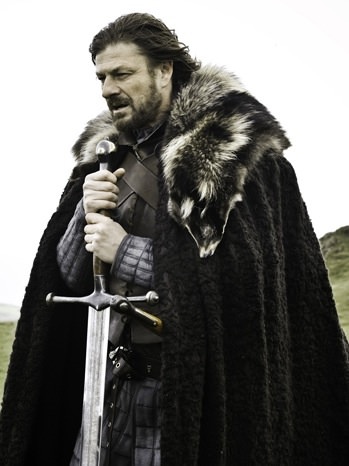