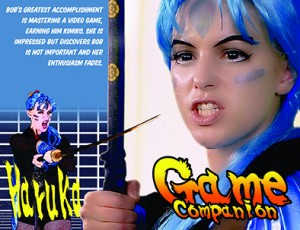 Bob (Bestwick) has spent the past ten months beating a video game. His reward? Bob now gets to choose his companion from a selection of tough guys and hot chicks. Unsurprisingly, he chooses a hot anime chick. Surprisingly, she’s not just his companion in-game!

While the acting at the beginning of Game Companion leaves a bit to be desired, the story is very entertaining. I honestly can’t say if the acting improves or if the story is so fun that I just stopped noticing . Either way I had a blast from start to finish.

I thoroughly enjoyed the video game sequences. The actors made to appear as though they were in a Mortal Kombat/Street Fighter style video game had me wanting to pull out my old consoles.

As far as short films go, Game Companion is one of the most fun I have seen. If you’re given the opportunity it is definitely worth checking out.

The makers were interviewed by ABC radio and were subject of a local news story.