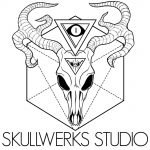 Gabe Petrou of Skullwerks Studios made a splash at Impact Comics’s 15th birthday celebration, which was marked by a pop culture festival in Garema Place, Canberra.

He and his partner were dressed as the main characters from Good Omens (love!) while both had their own stalls. Gabe is Skullwerks Studios and, as such, sells artwork in paper format and on clothing. His stall had the last few items of a nearly sold out trial run of his new designs. Later this year, he’s planning to officially launch this range of clothing that includes a dynamic electrified Death-cat (you’ve heard of the Death of Rats, well Gabe has the Death of Cats) and a dinosaur skull with flowers evoking Day of the Dead.

Gabe took the time to talk to us briefly. We’re also planning a Fashion Parade video to mark the launch of his clothing range.