Rahul Agarwal misses his best friend who moved to Scotland. He’s also lost his inventing mojo after she used his invention – a super wheelchair – to leave. But never mind, a new friend appears through a toilet seat portal in time. She’s his Future Friend.

Pip lives in a terrible climate-changed Matrix-style future where she never leaves her home because it’s dangerous outside. When she sees a glowing portal, she assumes it’s a transporter. And, for no particular reason, she decides it’s a portal to an exclusive wealthy-people-only sports stadium, so she jumps right in.

There are things Pip loves about the past including the taste of food (but not the tummy pains it gives her), the sky is blue not red, and they can play outside. But she misses her family. And soon she realises that her robot clone has taken her place: her parents believe the robot clone is her!

Pip wants to get home before the power runs out…

Rahul fits quite a few potentially racist tropes: he’s the geeky Asian inventor whose parents run a junkyard. However, Rahul is the central character of the story, has depth, a history and a future, so I’m giving Rahul as representation of people of color a thumbs’ up.

(Any reviewer of color who reviews this series, please feel free to give me links to your reviews so I can consider linking.)

Secondly, there is representation of women. Rahul’s mother seems to be the domestic type without agency. Pip is, however, a girl with agency and skills. She also defies a few gender stereotypes in sport, albeit with her 1001-years-into-the-future equipment. (Would have been nice if she’d done it without aid.) Pip’s mom is also a scientist trying to save the world. So, overall, representation of women gets a thumbs’ up from me.

In the previous book in this series there was a girl using a wheelchair. Rahul made her a suped-up wheelchair then she left the series. After mentioning her several times during the story, I expected her to show up at the end, perhaps for the showdown. However, she remains absent. I haven’t read the first book so I am judging based solely on Future Friend, but this representation is poor. It sounds like Rahul rescued her. She then left the story and, it seems, the series, as per Paul Darke’s normality drama where conflict and the messiness of disability is resolved by removing the disabled character. Rahul apparently misses her but doesn’t reconnect with her. Thumbs down from me.

Also the evil twin trope! Argh! And why oh why would ANYONE clone their kid to produce a companion for said kid who then becomes a household servant? Argh!

An underlying theme of Future Friend is catastrophic climate change and how it could detrimentally change society. However, the future is situated so far away that it’s not real.

Add to that, Rahul is given responsibility for changing the world. Alone.

One person cannot change the world.

We already have scientific inventions that could have resolved climate change decades ago or at least significantly slowed it while further, now current, research was completed. The reason significant change for the better didn’t happen decades ago is that power-brokers with money wanted more money and power. They campaigned to change the narrative in the 80s from “we must do something about climate change” to “climate change isn’t caused by humans” or “but is it real?” The Koch brothers and Murdoch are excellent examples. And here in Australia now, the government ministers’ offices are largely staffed by mining and Murdoch minions while ignoring scientists and firefighting experts.

One man cannot change the world.

It’s a “nice” trope but leaving action to someone else is a recipe for disaster. Action requires collective change, collective pressure on governments and banks and businesses world wide.

Future Friend is a cute charming story that children will enjoy. However, the messages are somewhat mixed, needing discussion – perhaps classroom discussion – to help primary aged readers explore the ramifications. Rahul, an Indian immigrant, is the central character saving everyone. Pip as a girl character has agency. Representation of disabled people, twins and climate change heroes leaves a lot to be desired.

Read this book if you enjoyed Wolf Girl, A Wizard In My Shed and How To Make A Pet Monster. 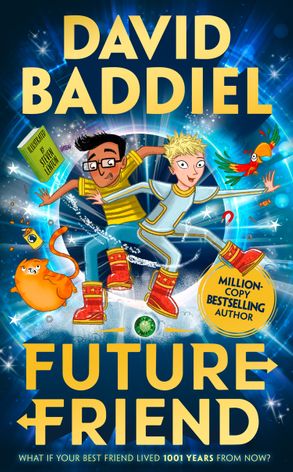