My reviews of episode 1 and episode 2 are at the links; I won’t repeat those observations here. For a comprehensive view of my thoughts on the Shannara Chronicles, I recommend reading my reviews in order. That way you can also avoid spoilers if you haven’t watched the earlier episodes.

At the close of episode 3, a Fury demon tracked Amberle to her Aunt Pyria’s place (the aunt is played by Sarah Peirse) and attacked her. Now Pyria is eaten alive by the Fury, which is a cross between a bat and a skeletal dinosaur. It’s nothing like a Greek Fury.

Wil is chatting to Amberle down by the waterhole. She says, ‘Keep your eyes up here’ because she’s naked after bathing and yet she caught Wil by surprise. Amberle chats to him as cool as could be, naked, holding him at sword’s length. However, the camera only shows her head and shoulders.

Once she’s mostly dressed, she hears a scream and races towards the beach to be threatened by the Fury. Alanon defends them but is wounded so they leave him in a druid cave to find help, only to be captured by the band of Rovers.

Cephelo (James Remar) is annoying as the leader of the Rovers. He’s capricious, deceitful and continually threatening people to get what he wants. In short, he’s a shallow melodramatic villain whose dialogue tires quickly. My memories of the novels are vague but I think Cephelo has been dumbed down and his villainy ramped up a bit for dramatic effect for the screen. After checking Wikipedia’s entry on the novel, I think Cephelo’s role has been increased in the story as a substitute for encounters with other characters and monsters. This becomes evident in later episodes.

Two people are hanging upside down with their intestines exposed. In a nearby farm building, Wil and Amberle hear noises. Wil breaks the (rather modern-looking) bolt and padlock on the outside to discover a young man — Bandon (Marcus Vanco) — in a Hannibal Lecter–esque mask chained up inside. They release him with not much more than a comment that they don’t know why his parents chained him up and masked him like a cannibal. This is problematic to say the least, especially in light of revelations of fathers keeping their wives and daughters as sex slaves in household dungeons and other forms of domestic violence.

The final few scenes of this episode plod by, with repetition recapping action and characters pontificating. Although I have no doubt that any parliament comprising of self-important politicians and dignitaries does the same, the key to dialogue in stories is ‘realism’ that is not realistic: to convey the sense of realistic dialogue with minimalist wordage honed to a point. This apparently slipped Shannara’s writers’ minds or they had a set episode length to fill so they waffled. Maybe certain actors’ contracts required a set number of words or a specific screen time?

Blood and gore increases in each episode, as you’d expect with an invading force hell-bent on destruction. Until later episodes, when it doesn’t. The Shannara Chronicles starts with hints of being almost Game of Thrones in its rating but, with about 5 minutes cut from the entire season, it’d probably make an M rating. Then take out the spurty blood from wounds, The Shannara Chronicles would become a family-friendly PG rating, which would better suit this story.

Lord of the Rings comes to the fore as an influence for the series in ‘Fury’; the LotR influence has been evident in previous episodes but is screamingly obvious here. The first demon looks like one of Saruman’s orcs with a slight change of costume. His communications with his changeling servant reek of the orb Palantìr that ensnares Pippin, the roaring background sound hinting at the Eye of Sauron.

The Shannara Chronicles episode 3 is still a well-above-average fantasy series on television; I may criticise — and I have — but, at this stage in our viewing, the minion defended the series passionately, pointing out how most fantasy series fall far below this standard. 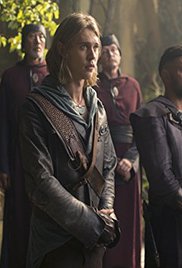