Farley is a comedian about to embark on a tour as warm up for a couple more established women. The publicity team want Farley to have a fake romance to increase interest in her personally. Apparently women need a man to promote their careers in comedy, hence the funny feelings. To be honest I had a few “funny” feelings about that.

Meyer is Farley’s manager and very close friend. He gets snippy at the thought of Farley pretending to date someone else so he agrees to be her partner. They already love each other very much but they’re in the friend zone because they’re terrified of losing their special friendship.

Cue all the fake dating tropes.

Some of Funny Feelings is truly hilarious. Scenes read like Dewitt sees these stand up routines in her mind. Some scenes are painted in detail but Dewitt hasn’t written them explicitly on paper. Some scenes could make readers absolutely wet themselves if written in detail but are portrayed in broad brushstrokes. Therefore they elicit a laugh or a chuckle instead of being wet-your-pants funny.

Am I being harsh? Maybe. Often my mood when reading a book impacts on my perception and enjoyment of said book. But I wanted to laugh. I’m sure if Wendy Harmer or Judith Lucy wrote those scenes I would have been doubled over, gasping for air while my abdominal muscles got their best workout since my hospitalization last year.

Hell, Will Anderson’s book I Am Not Fine, Thanks had me in stitches.

Show, don’t tell. Telling takes the humor down a notch.

Farley’s anxiety and panic attacks are relatable. Perhaps I’m too much in that camp but the mere thought of having sex then being in public with no shower, smelling of sex and feeling sticky, made me anxious as a reader.

Just me? Maybe. But I remember one morning when I was working and my supervisor came to work positively glowing AND SHE REEKED OF SEX. My reaction: can’t you at least SHOWER before work? Please?

I have been told I have a very sensitive sense of smell so maybe it’s just me.

Farley’s anxiety and Meyer’s response make enjoyable reading. Although Farley is at least a bit codependent, her hero’s journey increases her independent coping mechanisms. Dewitt is an author who takes her characters on emotional and learning journeys, leaving them better than before. I am here for that.

Does not exist in this novel. “I’m clean” seems to be the trope du jour, of which I disapprove. Sexytimes can be sexier with prophylactics if the author so desires.

Meyer’s daughter Hazel is Deaf and signs, she cannot lip read.  Hazel is funny, has agency, deals with crap and explores the world as a vital character in Funny Feelings.

It’s not often that I notice books with good representation of disability. Even rarer to notice consistency and OMG almost unobtainium rare to have both AND for the author to not labor or lecture. Dewitt credits the reader with remembering they’re using American Sign Language (ASL) to communicate.

The only time Dewitt really hammers home the point is when she introduces new relationships then later talks about Hazel’s extended family making the effort to learn ASL to communicate with her.

Paul Darke’s normality drama – where disabled characters are either killed off, move geographically, or assimilate on their own steam without others making accommodations – is completely absent in this novel.

I also love the scene where Farley talks about bigotry at Hazel’s school. It’s a pity there’s no follow up, woman assaulting Farley in retaliation is just a random incident. The lack of consequences for the assault and the lack of closure in Funny Feelings regarding that incident feels personal. I am often assaulted on the street because I’m disabled so I WANT JUSTICE.

Still, I have to hand it to DeWitt. If she’s not d/Deaf and/or doesn’t have family who are, then she’s done a lot of research and probably had some excellent beta readers.

Funny Feelings is uneven. At first it is HIL-AR-I-OUS. Then Dewitt loses steam. The flashbacks seemed distracting, shoehorned in to take up space. Then I realized that, like a stand up comedian, Dewitt inserted background material essential to creating running jokes. Funny Feelings follows the fake dating trope to its inevitable conclusion so satisfies the reader. Dewitt’s addition of a Deaf character is superb: Hazel has agency, is funny, and others make the effort to include her, particularly by learning sign language. I highly recommend Funny Feelings.

Read Funny Feelings if you enjoyed The Love Hypothesis.

Books in Australia tend to be expensive. However, $42.99 for a paperback from Dymocks is EXCRUCIATING. Amazon is selling the same paperback in Australia for $23.98 and the kindle version is $5.80. Obviously prices overseas are more competitive; the Australian govt is doing its best to kill the local industry. 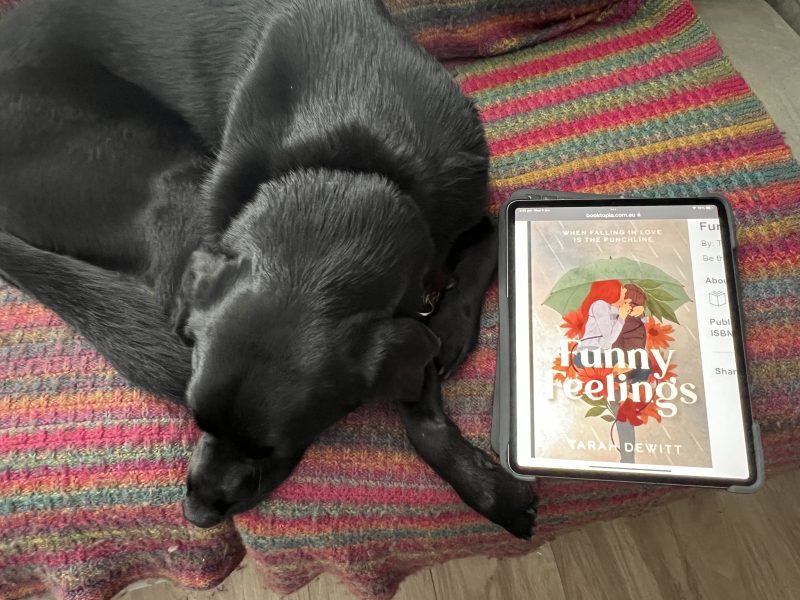