Alison Bechdel of The Bechdel Test is the comic book artist and author of Fun Home, a recently assigned comic for Impact Comic Books Club so it was a must read.

Fun Home is short for ‘Funeral Home’. Which is probably about as much as you need to know unless you’re into Literature with a capital ‘L’. Or, like me, you have a dire need to learn more about this woman whose comic strip referencing a friend’s comments referencing Virginia Woolf has entered mainstream culture as ‘The Bechdel Test‘.

Subtitled ‘A Family Tragicomic’, Bechdel’s story is autobiographical, relaying her childhood and early adult years with a focus on her relationship with her father. Throughout she draws parallels between her parents’ lives and the literature they loved to read, from James Joyce to DH Lawrence.

Bechdel’s father is queer, his life ending in an untimely manner a couple of weeks after his wife asked for a divorce. Throughout the book, Alison seems to be struggling with the idea he committed suicide although there are thoughts to the contrary. She also draws parallels between her own sexuality — displayed as masculine lesbianism — and her father’s not-quite-out queerness. Perhaps Bechdel feels some guilt for coming out, which she thinks challenged her parents.

Some of the frames are realistic depictions of lesbian sex: full frontal nudity with a head buried in the pubic region. Bechdel draws herself and her lover in what may now be considered Game of Thrones style yet she completed this work before Game of Thrones was a twinkle in its executive producers’ eyes.

Fun Home is interesting on an intellectual level as well as being an honest, confronting coming-out story. However, for those less interested in Literary parallels, Fun Home is repetitive. Subsequent chapters revisit the same years repeatedly, telling the same story with subtle additions or differences.

Accolades for Fun Home include being a US-wide bestseller, GLAAD Media Award for Outstanding Comic Book 2007, Stonewall Book Awards – Israel Fishman Non-Fiction Award 2007 and the Lambda Literary Award for Lesbian Memoir/Biography 2006. Fun Home has even been made into a musical that won 5 Tony Awards in 2015. 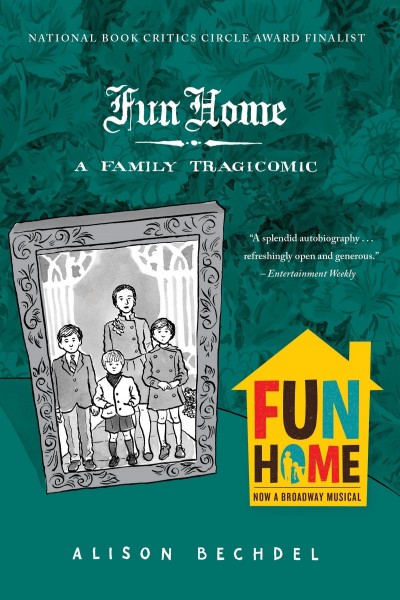