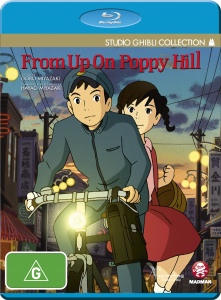 Umi Matsuzaki lives on Poppy Hill in her grandmother’s boarding house. Umi works hard caring for her younger brother and sister plus the boarders while studying at high school.

Every morning Umi raises flags, speaking in semaphore to her father who was lost at sea in the Korean War. (From Up On Poppy Hill is set in 1963 in the lead up to the 1964 Japan Olympics.)

Every day on his way to school, Shun Kazama sees Umi’s flags. He wrote a poem in the Latin Quarter, the school’s student newspaper. Shun then dives into filthy water at school, getting Umi’s attention.

Umi’s younger sister Sora wants Shun to autograph a photograph for her, so persuades Umi to come with her to the Latin Quarter clubhouse. They discover a dilapidated building filled with memorabilia stacked haphazardly, mixed with refuse and filth.

Plans to demolish the Latin Quarter outrage students using the clubhouse. Umi tells Suma to clean up the building, following actions with words and asking her friends to help. I gritted my teeth expecting sexism with the girls cleaning FOR the boys but was pleasantly surprised to see the boys cleaning alongside the girls. One girl even snatches plastering materials from a boy to show him how it’s done properly.

From Up On Poppy Hill passes the Bechdel Test – a simple gender-bias test – with flying colours. If anything, the boys talk more about girls when the girls aren’t there than the girls talk about the boys even though the story is told mostly from Umi’s (third person) point of view. Female characters have hopes of marriage but Umi wants to be a doctor. Umi’s mother studied hard after her marriage ‘just in case things went wrong’, evidence of an underlying expectation that women should be prepared for independence.

The backdrops are gorgeous; beautiful images of landscapes, house interiors, rusting ships and gardens. The amount of detail relevant to the story included in the artwork is amazing. Watching this with the clarity of bluray is a must.

Women aren’t objectified in this movie. Girls’ skirts are below the knee, with no ‘fan service’ (views of knickers or cleavage). Female characters are people not objects.

From Up On Poppy Hill is a high school romance drama set in 1963 without the sexism that could be expected from that era. The story is gentle yet engaging and the artwork is gorgeous. I highly recommend this movie to fans of high school romance.