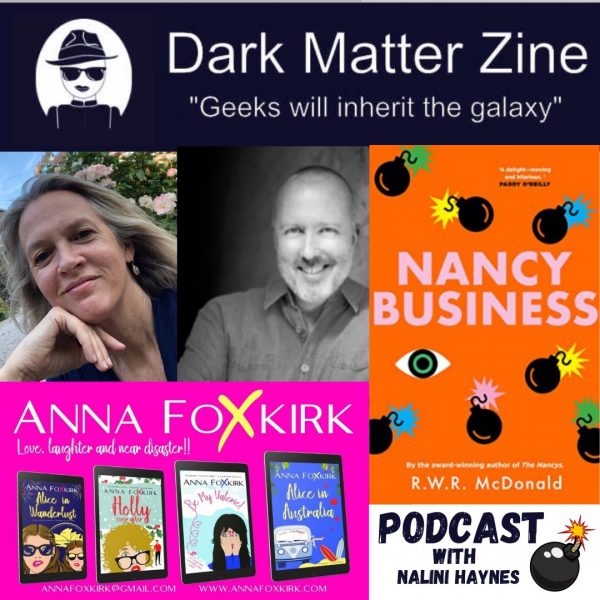 If you enjoy this podcast, you might enjoy the Romancing the Reader podcast featuring Anne Gracie, Sarah Mayberry and Kate Cuthbert.

Rob McDonald is a Kiwi living in Melbourne with his two daughters. And an extended rainbow family including HarryCat and Stevie Nicks the chicken. He attended Faber Academy’s Writing a Novel Stage 1 and Stage 2. So an excerpt of The Nancys was published in the Faber Writing Academy ‘Writing a Novel’ Anthology, Allen & Unwin (2016). While studying journalism, Rob realised that writing fiction, rather than reporting facts, is his true calling.

My review of The Nancys is here and Nancy Business is here.

Anna Foxkirk is a self-published author who did the same Allen and Unwin Write a Novel course as Rob and that’s how they first met. She has published three novellas so far: ‘Holly Ever After’, ‘Alice in Wanderlust’ and ‘Be my Valerie’. She just finished writing first draft of a fourth this weekend – ‘The Worst Noelle’ – hopefully you’re catching on to the theme here. The Australian Romance Readers Association voted Anna Favorite Debut Romance Writer 2020 earlier this year, but she says it is still very much early days in terms of her writing career. She’s in the midst of expanding ‘Alice in Wanderlust’ into a full-length novel, as well as a few other projects.

You’ve both written international travelers as central characters; why this flavor?

You’ve both written a seedier underbelly to your stories: for example, in ‘Alice in Wanderlust’, Alice fends off a gropy boss while the Nancy series is also about murder mysteries. Does romance need this element?

You’ve both written stories as a series: Anna’s are people who know one another – similar to Marian Keyes’s sisters series – while Rob’s are the same characters with evolving relationships. Why did you take different paths and what are the challenges?

What stories do you enjoy?

Thank you for being guests on Dark Matter Zine and thanks to listeners for joining us. If you enjoyed this podcast, you might also enjoy the Romancing the Reader podcast with Anne Gracie, Sarah Mayberry and Kate Cuthbert.