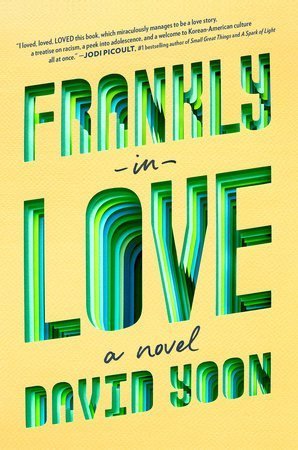 Frankly In Love is an adorable coming-of-age story that centres around Frank Li, a Korean American teenager with a crush on his best friend’s sister. However, he’ll never act on that crush because his best friend — and therefore the sister — are African Americans. Frank’s parents disowned his sister for marrying a black man.

So Frank meanders through life and high school, juggling the expectations of his family’s little Korean community and his broader peers’ expectations. He falls in love with an American girl whose only experience is ‘whiteness’, although she’d claim to be some flavour of European. But white is white.

Frank covers up his illicit relationship with a (shock, horror!) white girl of whom his parents would not approve. He and a Korean girl fake-date to keep their parents happy. Then that gets complicated.

Although one might expect a book with a title like Frankly In Love to be a romance, this book — despite its romantic elements — does not fit the romance genre as such. I applaud Yoon’s decision here: high school romances are sweet but, with life expectancies reaching 70 and 80 plus, high school romances do not really end with ‘happily ever after’. They’re more like ‘and so it begins’. Instead, Yoon’s novel is more daring: he broaches social issues including racism, racist minorities and class warfare in this charming coming-of-age story.

Anyone with an imagination can surmise what comes next. As Frankly In Love has lingered with me, I’ve pondered how I’d like Frank’s story to continue… which is a sign of a great book.

Read this if you enjoyed The Bride Test by Helen Hoang.

Rating: 5 out of 5 stars
Publisher: Penguin (Penguin Random House aka ‘Random Penguins’)
Release date: 17 September 2019 (in Australia)
Format: Hardcover although the ARC was a paperback, pp. 432