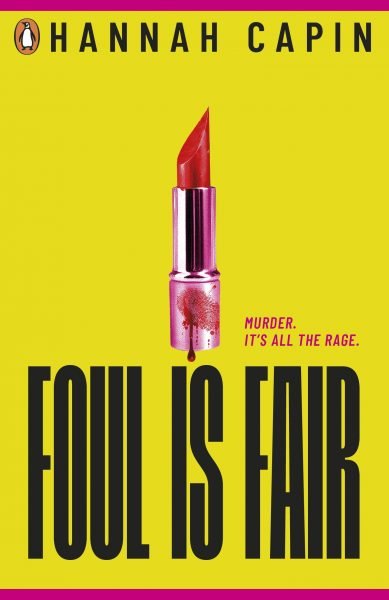 Elle and her friends gatecrash a party on her 16th birthday. Someone drugs her drink. A group of boys date-rape her. She changes her name, her look and her school in order to avenge her innocence. Thus begins a 21st century novel with strong parallels with The Scottish Play, hence the title Foul is Fair.

Now called Jade, Elle starts St Andrews Prep School on Monday. Murder is afoot. It’s only a matter of time before someone cries, ‘Out, damned spot!’

Let the punishment fit the crime

When Jade vows revenge after the rape, I was filled with admiration. Planning murder, however, horrifies me. To me, life is sacred. And yet these boys, these serial rapists, in real life would never be held accountable in a court of law. Look at the Stanford swimmer who got 6 months for rape then complained that he was a victim . How dare a court of law hold him accountable for his actions in raping an unconscious woman. In the Stanford case, two passersby literally pulled him off his victim so there was no doubt, no “he said, she said”.

Many other times when “elite” athletes gang-rape drugged women, hospitality employees witnessing the event do not intervene and even testify that “she was enjoying it”. There have been too many rape cases for me to find a link to that particular one, but here’s a link to an article about how 5 men gang raped a 14 year old girl but were acquitted of rape only to be sentenced for the lesser crime of “sexual abuse” because the girl was unconscious. At least they were found guilty and sentenced to jail; many times wealthy men get away with it. Look at Trump’s boast that he “grab[s] ‘em by the pussy”, kisses women and doesn’t even ask because he can get away with it. The underlying problem here is that rapists and paedophiles can get away with rape when they have wealth and privilege.

I was shocked that Foul Is Fair was about murder as revenge. When I realised how intentionally Capin has rewritten Macbeth for the “Me Too” movement in the 21st century I applauded her. I think.

Foul Is Fair centers on Jade’s experience and is mostly told by Jade. Much of the narrative is Jade’s internal monologue. This is arguably telling not showing because there is so much internal dialogue, so much angst and exploration. I do not like this style of narration. Let me rephrase that: never before have I excused that style of narration. However, Jade’s narration raises questions: is she an unreliable narrator? What is really going on? Who gave her the drugged drink? Under what circumstances? By the climax I admitted that Capin’s storytelling style is perfect for this novel. This teenage angsty internal monologue increased the tension while we barrelled towards the murders.

One caveat, however: the book covers about two weeks. All the pieces came together more easily than if it was a 2000-piece jigsaw. Real people are never that obliging, that easily manoeuvred and manipulated. I even question whether an inter-school football match would be held on a Monday; surely Jade should have had to wait for Saturday at the very least?

Overall, this story is well-written, but the plotting is a little simple, too much ‘because plot!’ and too little of ‘what would real people do?’

Foul Is Fair centers around Jade with her best friends as secondary characters and accomplices. Although the central premise of this novel is revenge for rape, it passes the Bechdel Test with conversations between women not witnessed by men and not about men.

Jade and her gal pals are the “Queen Bees” of high school, ruthless and violent. Capin gave her characters back stories that supported their sudden bloodthirstiness. Jade’s escalation to murder isn’t such a stretch when you realise that one of her BFFs is the daughter of a cartel boss, they’ve trained for combat while hanging out as besties, and they’ve literally drawn blood to school bullies while they were in primary school.

School structure, and especially girls, are seen from a slightly different angle to the normal high school story. In this, we have the Queen Bee, her inner circle (right-hand girl, left-hand girl, etc), “flock girls” and girls on the outside. I think it was Simone Howell who coined the term “interchangeables” or something similar: girls who are very similar in all the ways that count. Capin’s “flock girls” are similar except they’re acceptable to the “Queen Bee” (for example, they may be invited to parties) and yet they’re not in her inner circle.

No one in Foul Is Fair is painted in a good light. No one. So everyone – girls, boys, people from diverse racial backgrounds, parents – are equally maligned. This seems ok. It’s not like this is the only book focusing on teenage girls that will be published this year: thousands of YA books with girl protagonists are coming out. Foul Is Fair gives balance in ways other than ‘positive representation’. These bitches have AGENCY. Even after rape.

How many times have you heard stories about girls who could have acted to prevent assault and rape, or at least they could have called for help, but they walked away? Foul Is Fair calls them out too.

Throughout Foul Is Fair I worried that it could trigger some copycat crimes. Rough ‘justice’ also causes collateral damage, with innocent people targeted or hurt as bystanders. Capin does an excellent job of weaving these issues into her narrative. The ending wasn’t consistent with Macbeth – it’s not as if woods were going to walk in this story – but the ending is satisfying considering the story arc to get us to that point.

Foul Is Fair is a deeply shocking book that gives agency to rape victims while blaming rapists, those who dope their victims and the girls who knowingly walk away. This is not a book that blames girls or tells girls how to avoid being raped. Capin’s ending is complex and, to a certain extent, surprising, providing excellent fodder for book club discussions. While this gritty, challenging story is not for everyone, I highly recommend it.

Foul Is Fair is kind of like Half a King by Joe Abercrombie but without the fantasy.