A commentary with spoilers by Nalini Haynes. May also contain traces of snark.

Abbie (Nicole Beharie) is having a nightmare. Can’t they find a different way of opening a zode? If they keep this up no one will pretend to be surprised next week.

The woman from Abbie’s dream is about to jump from a ledge in real life but not before she imparts significant words to Abbie because IT’S A TROPE. Then Abbie has to find out who she is.

Doctor-lady on the ledge is Dr Vega played by Mary Kraft, not to be confused with the cheese even in this cheesy production.

Mills and Crane (Tom Mison) try to visit Jenny Mills (Lyndie Greenwood), Abbie’s sister, but Jenny won’t see Abbie. She’ll see Mr Tall Dark and English though. She doesn’t say much except “Get Abbie to tell you the truth”. That truth amounts to Abbie saying “I didn’t admit to seeing the monster because I didn’t want to leave my nice cozy foster home. Jenny told the truth and she was made to leave the foster home.” So, really, nothing new plot-wise, only “sad backstory” reveal.

Anyhow, Mr Tall Dark and English and Ms Mills go to visit Mr Rescue-Man from The Incident when Abbie and Jenny were in high school, Garrett Gillespie (Pete Burris).

Gillespie is sitting in his shed as men do. He smacks his hammer around then plumps down on a seat to drink a stubby.

HOW MANY LADDERS DOES ONE MAN NEED? This dude has at least 3, all about the same height and design, just different colours and slightly different dimensions. I guess they offset all the birdhouses and the cat multi-leveled platform in the shed while he walks into another room to get a gun to use against the white man with black eyes.

Someone hears shots fired at his place. I guess he wasn’t such a farm boy after all but, instead, lived in the burbs.

Irving (Orlando Jones) walks out of his office carrying a street sign warning of horses with riders — but someone cut off the top of the sign, including the head. Irving yells then Abbie’s ex fesses up. Irving seems to have a sense of humor but, if so, why the big testosterone-fueled rant?

He bonds with Morales (Nicholas Gonzalez) over being Abbie’s ex. WTF? Like that’s relevant to their working relationship and suitable fodder for discussion IN THE MIDDLE OF AN OPEN-PLAN OFFICE?

Abbie, although not actually called to the scene, is the one and only cop to go inside to talk to Mr Gillespie. She finds a smashed mirror that reeks of the mirror left in Brooks’s cell through witch the monster walked after killing Brooks — and the CCTV footage shows Brooks smashing his head against the mirror.

Abbie’s false eyelashes are getting longer. They might obstruct her vision. Imagine: a shootout. Ah, I can’t see, I have an inch-long eyelash in my eye.

Gillespie starts shooting in the air although the monster is behind Abbie. WTF? With all those shots fired already, why is he a) still alive and b) not out of ammunition?

“He’s coming for you next,” says Gillespie. I guess he was waiting for Abbie to give her a message before he blows his brains out.

“The Sandman. Next time you fall asleep,” says Gillespie because he’s been reading too much Neil Gaiman. Pity the writing in this isn’t as deep.

Then he kills himself.

Abbie fesses up that no one helped Jenny although there was a growing list of people who knew the truth, who believed she wasn’t insane.

They discuss the Sandman. Crane is objective — and funny. And even more funny when he tries an energy drink for the first time. He chokes.

They read mythology books about the Sandman. Crane suddenly goes from knowing nothing Jon Snow to knowing a hell of a lot.

Crane credits Mohawk Americans with helping the US fight against the British. The Mohawks warn that ignoring your neighbor’s plight will cause a vengeance demon to come and dish out the karma for supporting evil. For the triumph of evil only takes good men doing nothing.

Crane rants about how the rebellion intended to unite 13 diverse states. The research, the authenticity!

They head off to find local Native American Wistaron (Matt Medrano) who happens to run a used car lot. He says the cops gave him time to clean up the environmental waste in the backyard. So he’s not a good Native American.

Crane says “The only thing necessary for the triumph of evil is for good men to do nothing”. He adds that the vengeful demon guy will come for Wistaron if he doesn’t help.

Suddenly he wants to help.

The stakes are high: if Abbie dies in the dream she dies. What a surprise.

Crane decides to join her.

After Mills and Crane drink the ‘tea’ Wistaron says the venom will take them beyond sleep. I thought scorpion venom wasn’t too bad unless it bit you?

The scorpion venom isn’t in the tea. Wistaron puts them on Mills and Crane. Scorpion tail lash puts my cat to shame. They sting. Again and again.

At least they’re big scorpions so they’re not as toxic as the small dudes. 😛

In an alternate reality, the Sandman pours sand from his eyes. Crane opens a door that has no wall.

In the flashback the sisters look like they switched bodies: the sister with the thicker lips is Jenny not Abbie.

WTF?! Crane should be immune to the Sandman because he tries to help everyone.

“Your sins aren’t mine to punish,” says the Sandman. I was right! But Crane has done bad things although he hasn’t left people to suffer while staying silent.

After entering the dark side to face her misdeeds and once again staying silent, Mills finally speaks up because Crane’s sins aren’t the Sandman’s to punish but the Sandman is attacking Crane anyway. I’m confused.

Back at the Bat Cave, Irving rocks up and doesn’t want to know what happened. They’re the new Xfiles/magic unit that no one wants to know about. How very every-magical-investigations-cop-unit EVER.

Abbie goes to visit Jenny who isn’t there. There’s a not-very-well hidden trapdoor in the ceiling.

Crane flip-flops between knowing nothing and knowing everything. Consistency is a virtue. However, I love that he leaps in to help Abbie — only to ‘help’ by needing her to rescue him although he shouldn’t have needed rescuing. Ok, consistency is not a virtue of the writing but the woman rescuing the man rocks. Also, I love Crane as a character and the dialogue, especially between Mills and Crane, adds a lightness, humor and depth like the bromance in Supernatural.

Still not rating Sleepy Hollow because you’ll either love it for the cheese, the humor and the characters or you’ll hate it because of plot holes and cheese. It’s personal taste. 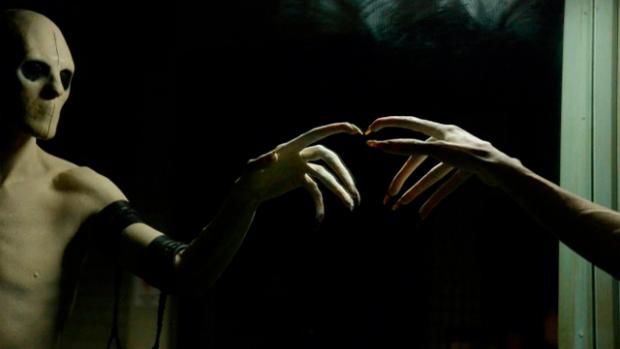