Fool’s Quest is the second in the Fitz and the Fool trilogy by Robin Hobb; this review will contain spoilers for Fool’s Assassin, the first in the trilogy. I will endeavor not to repeat myself here so, if you haven’t read the first book or my previous review, I recommend you get thee hither to a previous review.

At the end of Fool’s Assassin, Fitz’s daughter, Bee, was stolen by a group of Chalcedean mercenaries accompanied by some pale people who loyal readers suspect are Whites or their servants. Fitz is oblivious while visiting Buckkeep to mend the Fool after stabbing him for touching Bee. Because he tends to overreact at times.

Early in Fool’s Quest, Fitz learns of the attack on his home, Withywoods, the abduction of his daughter and a young woman, Shun, whom Chade had placed into the Fitz’s care. Much blame was laid upon Fitz for not having a house guard and failing to stay to protect his home as if he or any house guard would have been immune to the psychic attack that preceded the physical attack.

The Chalcedean mercenaries rebelled against their White employer to pillage, rape and murder residents of Withywoods. Young girls could not walk properly after gang rapes. This felt gratuitous and Game of Thrones–ish in a negative way; sure, Hobb has written rape before but never on this scale. Shun lives in fear of being raped as a prisoner, too.

However, Hobb uses this rape as a dialectic device: Fitz is infuriated by the treatment of his people. A month or two go by with him pretending everything is fine at court before he sets out; this seems rather out of character but he’s supposed to be developing in wisdom. Later, when he finally gets off his ass and does something, he confronts the bastards and tells them how rape doesn’t make them men but justifies the Fitz’s behavior because he is a man who respects women. Some will argue that Fitz’s attitude is one of ownership of women but I disagree: he treats womenfolk with respect and abhors the Chalcedean attitude.

I enjoyed the use of different points of view in Fool’s Quest; the Fitz is an unreliable narrator at times — he’s a self-involved porcupine — so these other points of view add both to the story and round out interpersonal dynamics. A broader cast of characters becomes three-dimensional.

The Fool beseeching Fitz to embark on a murderous rampage was confronting; Fitz’s refusal until the Fool’s quest aligned with Fitz’s fury was in character. Fitz continues to screw up; you’d think he would have learnt to listen to the Fool more by now but at least he’s consistent.

Someone please smack Fitz upside the head. Because ignoring the Fool was bad enough but his care for Bee’s dream journal AND HIS FAILURE TO READ IT made me want to scream. I’m hoping he gets his head out of his ass for book 3.

I’m as engrossed with these characters as ever. Kettricken, Dutiful, Elliana, Chade, Rosemary — all characters from previous books — feature large within this story, not as mere fan services but as active characters whose actions and relationships are important within this story. I’m torn between saying Fool’s Quest was a little slow and saying the suspense was killing me. I powered through this doorstopper so it obviously wasn’t boring. Readers will be divided.

I highly recommend Fool’s Quest but only if you’ve read the Farseer and the Tawny Man trilogies and, preferably, all the preceding novels. Robin Hobb’s website has a handy list of novels in order. 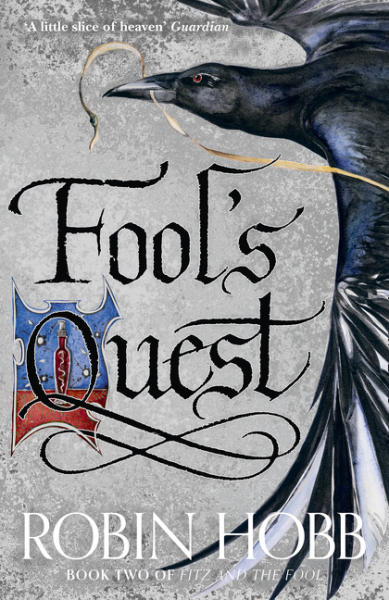