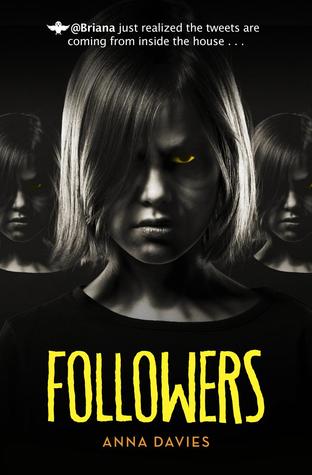 I don’t even know that I can be bothered writing a synopsis. Let’s see how it goes.

Briana is the new kid at an elite New England arts school. She is in her second semester and hasn’t made any friends yet. When she returns to school early with the rest of the students who are trying out for the winter play, Hamlet, she suddenly makes a whole lot of friends on the first night back. Briana even wanders off with the most popular boy in school to rehearse their lines alone. Lucky her.

When she doesn’t get the part, she is made the social media director for the play. Tweeting from character perspectives, behind the scenes, updates, etc. However, when another Twitter account begins to predict the deaths of high profile students, Briana is cast in a role she never prepared for — murder suspect.

Can Briana find out who is killing her friends before the final cut?

Wow, look at that, dear reader. We made it.

Another book in the the Point Horror series, another atrocious back cover blurb. I thought the last book in the series (Wickedpedia) was just a fluke. Maybe the person writing the blurb had a bad day and the editor didn’t pick up. Apparently it’s a trend though. The blurb for Followers is misleading, inaccurate and, in some parts, downright wrong.

The writing in Followers leaves a lot to be desired. From the droning way we are told what Briana looks like to weak attempts at giving characters depth by introducing superfluous characters.

The only scary thing about Followers is how disassociated the high school students are when their peers are dying around them. They just keep carrying on with their lives as if nothing happened. There’s a half-hearted memorial here and a candlelight vigil there but, all in all, the novel has completely unrealistic portrayals of grief affecting teenagers. Anyone who has watched the news after an event like this happens in reality would have been able to write a better portrayal. Even if they aren’t all upset, surely at least one of these prestigious students would call their parents and say ‘Oh, hey, Dad. Yeah, I’m fine, but do you think maybe you could come pick me up and take me home since several of my classmates are dying under highly suspicious circumstances. Okay, see you soon. Love to mom.’

The lead female Briana is a vapid, flighty, daft, whiney, annoying character. She encompasses every bad stereotype you can assign to a teenage girl without a single redeeming feature. If the character of Laurie Strode had been even a quarter as annoying and flawed then the Halloween franchise would have died with the first movie.

Briana meets Eric who she has seen at school but never ‘met’ before. The day afterwards she is thinking to herself that she is falling in love with him and spends the rest of the book obsessively pining for him.

Spoiler alert: When Briana ‘discovers’ the person responsible for the murders, she sneaks up behind him and pushes him off a catwalk to plummet onto the stage below. That’s right. Oh, those sarcastic quotation marks? She didn’t actually find proof. She found circumstantial evidence in a public place that could have been planted by anyone. So naturally she decides he should be pushed off the catwalk. He doesn’t die as a result and, of course, he does turn out to be the killer, but that’s not the point. The point is that she threw a potentially innocent person from a great height, not knowing if he would fall and land on his head, break his neck or land on someone below … all based on a hunch. Oh, and until he turned up dead she would have bet her bottom dollar that it was one of her friends, Tristan.

Where were the police in this whole novel, you might ask? Nowhere. Teenagers at a prestigious New England boarding school are dropping like flies and there is next to no police presence. No one in interviewed, no one looks to the teacher who happens to connect all of the students, no one questions the social group or conducts any kind of investigation.

Every character in Followers was a two dimensional cut-out of a human being. There were no characters that invoked any sense of empathy, interest or even passing curiosity.

All in all this is one example of Followers that should be blocked.