Amanda wants to teach her cat to fly everydayportrait.blogspot.com/2011/08/amanda…

My immediate response may have appeared to be a smart-ass quip, but was, in fact, the honest truth.

I will begin at the beginning as it’s a very good place to start.

A long, long time ago, in a place far, far away – in Tasmania, in fact – there lived a little boy called Booey.  Booey wasn’t his REAL name, the reason he got this nickname was because, well, he was a boy.  His mum, who later became the editor of a science fiction & fantasy website [pointed look] was seriously into Star Trek.  Actually, both of Booey’s parents loved Trek.

When Booey was only a few weeks old, Booey’s parents took him to a function where they were chatting with another friend who also liked Star Trek.  Booey’s dad, who is seriously mentally ill in that very special way only fathers seem to achieve, reached over to Booey who was being held by his mum.  Booey’s dad gently placed his forefinger on Booey’s chin and moved Booey’s chin up and down while saying in a high pitched voice, ‘I like Star Trek.’

Tuffy, the other Trekkie friend, nearly wet himself.  I’m not sure if this was with hilarity or feeling disturbed, but this spontaneous weirdness really triggered something for Tuffy.

This was back in the days of the dinosaurs before Star Trek: The Next Generation was shown in Tasmania within a year of it airing on US TV.  Deep Space 9 and Babylon 5 hadn’t reached TV in Tasmania at all.  Booey’s parents’ friends had bootleg video tapes – yes, VIDEO TAPES – made of DS9 and Babylon 5 and mailed over.  People gathered in University of Tasmania lecture theatres to watch these video tapes and, after being busted, they met in lounge rooms all over Hobart.

If you recall Star Trek: The Next Generation, they kept talking about space buoys.  Now the funny thing is that Australian and American English might seem to be the same on the surface, but in Australia, ‘buoy’ is pronounced ‘boy’.  In America – or at least on Star Trek – they pronounce it ‘booey’.  So Booey’s mum decided to call her boy Booey.

A year or so passes…

Booey is now fully mobile, walking and climbing everywhere like precocious toddlers do when they’re about 18 months or two years old.  They also like to experiment.  I’ve heard of stories about children who flushed their mother’s expensive jewellery and all sorts of horror stories.  Booey wasn’t like that.

Booey found toilet paper made an excellent toy.  Even though the toilet door was kept FIRMLY CLOSED, he’d manage to get in from time to time.  Either his sister would leave the door open or he was just REALLY determined and managed to turn the doorknob that really wasn’t that high up.

Booey was an intrepid scientist at this stage of his development so he wanted to experiment with this miraculous invention himself.  He’d unroll the toilet paper around the house and put it in the toilet and flush.

The problem was, unrolling the toilet paper was something he did AROUND THE HOUSE.  He didn’t bother so much with the unrolling when he PUT IT IN THE TOILET TO FLUSH IT.  -_-

At this point in time, Booey’s family was so very, very broke that Booey’s mum nearly cried whenever 3 or so rolls of toilet paper were wasted in this manner.  Or maybe it was having to reach in to the toilet, fish out wet rolls of toilet paper and bin them in order to unblock the toilet… So much time has gone by, my memory grows indistinct.

Anyway, Booey’s mum felt very put upon – she couldn’t take her eyes off this precocious child for a minute without something being dismantled or demands for her TOTAL attention.  Until…

One day Booey’s mum had at least a couple of minutes of peace and quiet, until she heard VERY STRANGE noises coming from the toilet.  She hurriedly glanced around then sped to the smallest room, where the door was slightly ajar.  In trepidation, she gently pushed open the door to discover – yes, Booey was in the smallest room, AGAIN.  BUT this time he wasn’t stuffing toilet paper into the bowl.  This time – this time – THIS TIME HE HAD FIRM HOLD OF THE CAT AND WAS ATTEMPTING TO STUFF THE CAT INTO THE TOILET.

This poor cat was so tolerant that, instead of digging its claws into Booey, it refrained.  It dug its claws INTO THE TOILET SEAT.  FIRMLY.  There were gouges in that toilet seat that had to be explained for years to come, as we were too broke to replace it.  When we sold the house to move interstate, I figured no-one would notice the toilet seat – at least, not until AFTER purchasing the house.  The new owners could replace the toilet seat.  My one regret was that we didn’t have a camera with which we could take a decent photo of the gouges in the toilet seat, but that toilet seat lives on in the collective family memory. 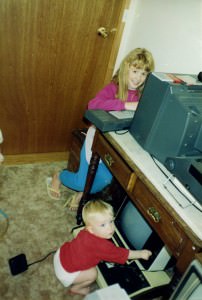 Booey and his sister –
butter wouldn’t melt in his mouth!