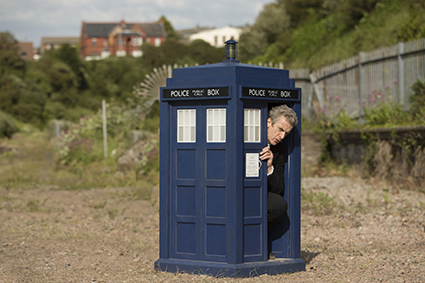 The Doctor (Peter Capaldi) and Clara (Jenna Coleman) have been on a jaunt. They arrive back on Earth but in Brighton, making Clara late for her date with Danny. Clara lies to both the Doctor (he’s fine with it but why the lies?) and Danny (who hasn’t ever protested about Clara’s relationship with the Doctor, so why the lies?). This is, of course, more important than the fact that, when they arrive, the door on the TARDIS is the size of one of those 1:2 display models at expos and the exterior of the TARDIS is, likewise, scaled down.

The Doctor says it’s too dangerous for Clara to get back in the TARDIS so he sends her off in to the wide world where it’s so much less dangerous to investigate while the Doctor squeezes his lanky frame back inside the TARDIS.

A young Banksy wannabe, Rigsy (Jovian Wade), is doing community service for graffiti. As Banksy says, it’s easier when people assume you’re supposed to be there. A young black guy with a spray can is always going to be a target.

People have been disappearing. Those who disappeared are in a mural on the walls of an underpass that the nasty man supervising the community service workers wants painted over.

Clara meets Rigsy. Clara tells Rigsy that she’s the Doctor. Clara assuming the Doctor’s identity has been part of this season’s story arc. At least in ‘Flatline’ it’s played for humor.

Rigsy uses his lunch break to help Clara investigate a few more missing persons. They acquire a redshirt in the form of PC Forrest (Jessica Hayles) when they break in to a crime scene.

Danny calls during a moment of extreme crisis. Clara says everything is fine. What Danny heard could have been mistaken for the throes of sexual passion so he’s either the world’s best man or a fool to trust Clara. However, the scene was played for laughs.

The physical humor escalates into Addams Family references, verbal and visual. I recently re-watched the Hogfather and wonder if that was an influence too. There were the inevitable self-referential cues as well, like the TARDIS turning into a Pandorica-like cube.

Although ‘Flatline’ included segments of the inevitable Danny–Clara relationship and the Missy-in-heaven storyline, there was sufficient plot in this story to create good pace and tension alongside humorous sparkles. Definitely one of the better episodes of season 8.