“Come in, come in! And tell me all about ya travels,” says a short bearded man with a gigantic proboscis (nose) as the introduction when you log in to Hearthstone. Hearthstone is an online card game somewhat like Magic the Gathering but made by Blizzard and based on Blizzard’s long-running World of Warcraft MMO (massive multiplayer online game), using WoW’s people and history to give the card game more character.

Hearthstone has been running in full release for about one and a half years. I’ve been playing for well over a year but last night was the first Fireside Gathering I’ve attended.

Fireside Gatherings are where a bunch of people — friends or strangers — gather in one place to play an organized tournament. Blizzard provides prizes.

I staggered down the stairs, melting in Canberra’s summer swelter. (Hasn’t anyone told the weather it’s autumn?!) Walking inside, the Guild was pleasantly air-conditioned. At first glance, the seating area is in an L shape around a counter that separates the kitchen from the main area. Most of the seats were roped off, designated as Fireside seating, while the tables along the front of the counter were for other patrons. Throughout the evening people came just to eat while others played board games in that space.

The Minion and I took seats at a table set for 8 within the Fireside space. Later four other people joined us; this was a great way to meet people. A waiter chatted to me about Doctor Who and how she’d gone off it because of Moffat but now she’s decided it’s wonderfully camp and silly and is trying to watch even the Moffat ‘zodes although she’s identified the Point Of No Return in the Moffat arc. The chef in the kitchen made ‘Grrr, Argh’ noises at the minion who was wearing a Mutant Enemy official tee shirt. Staff are genuine geeks and friendly too!

Seeing our overheated state, a waiter promptly brought us glasses and a glass bottle of water to share, which was free. Throughout the evening, as well as guzzling water, we enjoyed their apple cider. The minion ordered a Guild Master pizza for dinner; he said it had a good amount of topping. I had a quinoa salad and we shared some wedges. Actually, we shared half a bowl of wedges because, although they were good wedges, we were satisfied and left the other half… sitting there, sad and lonely on the table. The portions are good sizes and not expensive. We’re planning to eat there again and we can be fussy — the minion is a bit of a foodie — so we recommend the Guild as a restaurant.

Nile was last night’s guild master. He and Anthony, both Guild peeps, had their hands full when they discovered that, although their internet connection theoretically had unlimited users, their router did not. Their router also preferenced 3G devices over 4G. These teething problems were largely overcome by a combination of wireless connections, people using their phones and others tethering to phones. Hopefully next time everything will run more smoothly… and I’ll have the settings figured out so the minion and I can both tether to my phone without either ipad dying.

The minion’s first round competition was against Dylan who was sitting out our table already. A dynamic battle ensued with their third and final (tie-breaking) game outlasting every other game in that round, hence the gathering around our table with people watching the battle on the iPad Pro in the below photo. Finally, Dylan took out that round 2-1.

In the first round AmpleBus annihilated me, 2-0. My biggest regret was playing my warrior then my priest deck; I may have had a look-in if I’d played them the other way around. Not saying I would have won, just saying I might not have lost to such an embarrassing degree.

Every competitor entered 2 decks and had to win with both classes to claim a win in any round. That’s why, in round 2, I played my warrior then my priest then my warrior: I chose one deck (the one withOUT the gold hero power

) and lost. Then I played my priest and won so, for the tie-breaker, I had to revert to my warrior against a druid. The match ended with the druid doing THAT DRUID THING (plays 3 treants with charge then SAVAGE ROAR* to buff all the minions and the hero), taking me down to 1 health. Then I played Reno Jackson so I was back up to full health (30). It was a risk — I’d had Reno in my hand the previous turn but thought (hoped like hell) that I could hold on for one more turn to make Reno work that much harder. At that point, Willo, a good player and good sport, conceded. Luck was with me.

In between each round we sat around talking geek stuff and getting to know people. Bonka was also sitting at our table; his phone was suffering because of too much Hearthstone during the day. Late in round 2 he borrowed a recharge cable and duck head then moved to a booth with power points for recharging devices.

Round 3 saw some people leaving but many stayed. This time I played my priest then my warrior. It was a dynamic match and surprising when both Roland and I played warriors for the second game. Roland is one of those players who, when things went badly for me, emoted, ‘Sorry that happened’ in-game. After a few times I returned the favor. Roland eventually ran out of cards and only had one weapon left. I had several cards in my hand including Reno Jackson, another card enabling Reno to return to my hand and the Golden Monkey that converts all cards in your hand and deck to legendries (the best minions available). I also had about the same health as Roland but about 20 more armor so… I refrained from apologizing when Roland conceded. 😀

The minion’s games went 1-2, 1-2, 2-0 so we were both eliminated before the semi-finals. At about 9:45 pm we left the die-hards and the cream of the crop to complete the competition and walked home because the minion had work the next day.

When we arrived home, we may have played one or two games each to unwind before we hit the sack. Just one or two. [Shifty eyes]

Overall, the Fireside Gathering was an enjoyable night out. The minion and I plan to go next time.

*I previously said this was Power Overwhelming but that’s a warlock card. I’m just so used to being overwhelmed by Savage Roar that I confused the two cards. 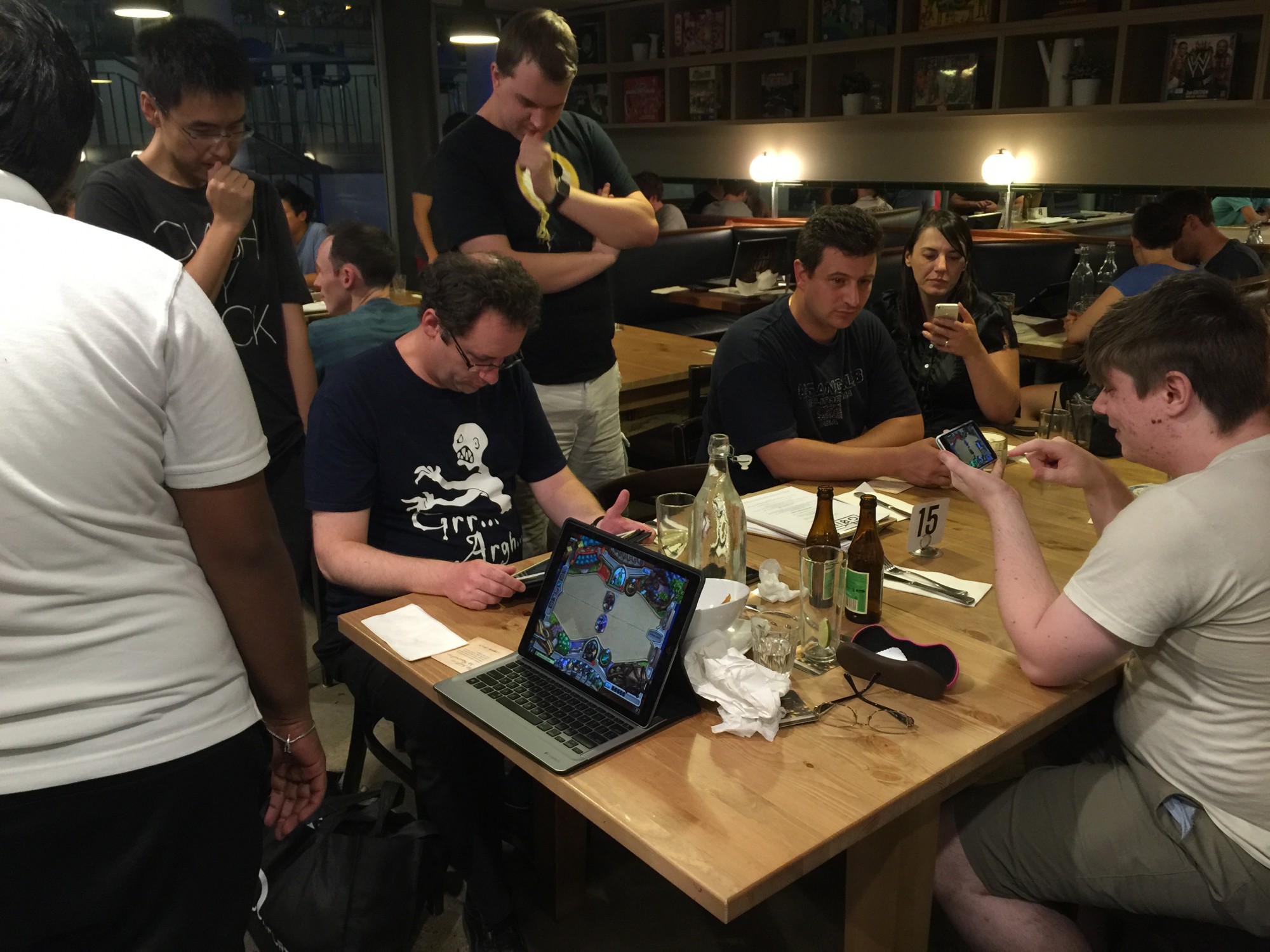 The minion plays Dylan at the Guild in Canberra with other Hearthstone competitors looking on.