Reeve is a squire. His former mistress, the Airl’s (Iord’s) wife, placed him in a vassal’s (Sir Garrick’s) household. (Everyone seems to be related.) Maven is the daughter of a bankrupt nobleman. Her father placed her as companion to Lady Cassandra, Sir Garrick’s arranged bride. The Airl arranged the marriage so Sir Garrick would order his new bride to give the Airl’s daughter one of the kindgom’s most precious jewels, the Fire Star. Amazingly, the Airl appears to not be one of the bad guys. I think. Maybe. Perhaps.

Reeve and Maven are 16 and 15 respectively, indentured in their respective positions. When the Fire Star goes missing, because Reeve is new to the household, the Airl capriciously (?!) selects him to find the jewel. Should Reeve fail, the Airl will either find Reeve guilty of the theft or send him home.

Maven joins the hunt because she wants the jewel to fund her and her mistress’s escape from marital servitude. What follows is a whodunnit with added social issues.

The Fire Star vs disability

There are two specific instances of disability in The Fire Star. The first is Reeve’s older brother, Larien, who is

sitting at home at Norwood Manor, an invalid for life – albeit one who would, as the oldest son, inherit their father’s title, the manor and all the lands that went with it (p. 14).

Throughout the Fire Star, Reeve thinks about his brother as useless, his disability a disappointment to their father. Reeve worries that he – although not disabled – will be even more of a disappointment. Larien never appears in the story. Reeve thinks of him semi-frequently and always in terms of disability, passivity, and disappointment, while worrying that his father thinks worse of Reeve than Larien. The ableism is strong with this one.

I cannot understand why Tait couldn’t just write a sibling rivalry with a lesser-valued younger son instead of incorporating such egregious ableism, thereby perpetuating the dominant discourse, reinforcing disability discrimination. If a future book does something to upset Reeve’s foundational theme, it will – in my opinion – be too little too late.

The Fire Star vs feminism

This novel is an anachronism, endeavoring to be a 21st century feminist text for middle schoolers but with contradictory messages. The fearsome Lady Cassandra’s contradictions – one minute outrageous and powerful, the next revealed as a sham – may, arguably, be dismissed as character complexity. However, Maven, a 15 year old girl, decides that 23 year old Lady Cassandra is better off married than independent. In this Maven is similar to George Eliot who claimed special exemption for herself from oppression by the patriarchy while believing other women deserved oppression. And Maven makes her decision on the basis of one game of chess.

The second instance of disability is late in the novel so I will, perforce, be vague. “Good” guys gaslight a “bad” guy, claiming he suffers from “a mania”, saying “his mind seems to be wandering”, and dismissing his testimony as “the ramblings of a madman”.

So technically, this instance of disability is not actually disability but it is gaslighting and ableism deriding someone for alleged mental health issues. This just pops up at the end. [whack-a-mole]

The Fire Star‘s biggest claim to feminism is a women’s underground railroad. This railroad helps women escape except when the plot requires that they don’t.

I won’t go into detail about the denouement because spoilers. However, I have issues with aspects of the conclusion because of errors of logic resulting in a certain outcome that also works against women and undermines their allegedly feminist beliefs and power. I suspect Tait’s decision was “because plot” but working these elements differently could have resulted in a more powerful, more feminist novel without, I believe, increasing the word count.

It seems my “tribe” – disabled people – are excluded in this society and as potential readers. I have the impression that The Fire Star has an all-white cast but I could be mistaken. Certainly there weren’t any conflicts over differing religions other than accusing any woman who has skills, can read or isn’t submissive of being a witch. Tait has taken the usual misogynistic patriarchal feudal society and ramped it up a few notches.

I finished The Fire Star last week and have been mulling over it ever since, even considering not reviewing it. However, as others on Twitter pointed out, I have a responsibility to challenge ableist writing to inform disabled people and in the hopes of raising standards.

If you’re looking for a feminist novel for this age group, I highly recommend Wonder Woman: Tempest Tossed. and Lost Soul Atlas. 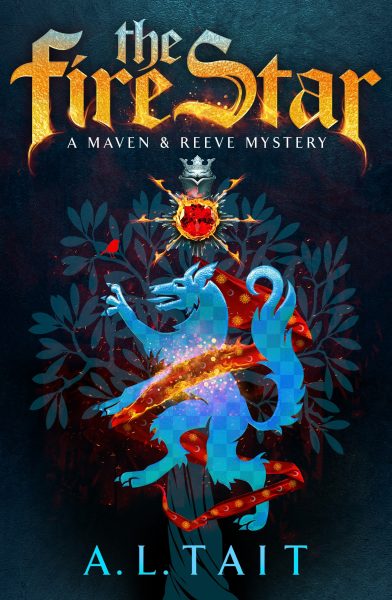