Lucy Baker, Jason Franks, Tor Roxburgh, Darren Sanderson were fighting like girls in this panel on Saturday afternoon. The program guide said, “The last few years have brought us a new generation of female action heroines. Is the feisty female protagonist satisfying the contemporary feminist audience?”

Discussion focused mostly on the kick-ass physical fighter rather than a broader representation of female protagonists. Darren is an experienced sword fighter, I think Jason said he’s into martial arts, Lucy previously broke her sternum and Tor has moved from romance into fantasy so this was an engaging discussion.

They talked about everything from silly fight moves to ridiculous choreography for movies including Katniss’s versus some dude’s bowman-ship in different movies. The verdict was that Katniss was taught by an Olympian and her bowman-ship was excellent. The dude to whom they referred was also taught by an expert but the movie director wanted it to ‘look good’ so the dude’s arm would have been one bloody black bruise from string burn, not to mention his aim would have suffered greatly.

I can hear the Hunger Games fans cheering.

BOOB ARMOUR was a pet peeve for all but especially Lucy as boob armour significantly increases the chance of breaking one’s sternum and generally BEING KILLED. Lucy claimed ‘Grandma’ status as she is concerned about female fighters skinning their knees, feeling cold and being vulnerable to all sorts of serious injuries due to inappropriate dress.

Boob armour evolved into talk about women in present day armed forces only recently being given armour fitted to the female form after previously wearing armour fitted for men, and how ill-fitting armour detrimentally impacted on marksmanship.

If you’re considering writing fight moves or building armour for women (verbally or visually), I highly recommend talking to an expert.

I volunteer this panel. [runs and hides] 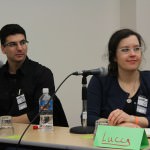 Jason Franks and Lucy Baker in Fighting Like a Girl 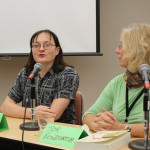 Darren Sanderson and Tor Roxburgh in Fighting Like a Girl