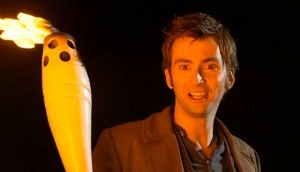 The Doctor (David Tennant) and Rose (Billie Piper) land in what was then near-future London to see the 2012 Olympic torch relay.

Some mild comedy leavens the usual landing when the Doctor pokes his head out of the TARDIS to be confronted by an obstacle – a gate – so he dematerializes and returns 90 degrees and a few seconds later. A sign clearly says no parking in front of the gate but, technically, the Doctor appears parked within the gate.

Off they wander. Before finding people lining the streets, the Doctor and Rose find signs asking for information about missing children, all of whom lived in the one street. An old woman is worried about the children, trying to protect them but is ignored by the children’s parents.

It’s not clear why Chloe is isolated in a street full of children. At first I wondered if it was her color (but a colored boy played with a white friend) or a mobility impairment (Chloe walked freely and didn’t seem to be under quarantine). Apparently experience of domestic violence isolated Chloe from her peers and continues to isolate her a year after the perpetrator’s death. Trish, Chloe’s mum, talks as if she was powerless to do anything about the abuse, saying “Chloe got the worst of it when he was alive”. This is not Doctor Who‘s finest hour and yet raising the issue, dealing with the emotional baggage after removal of the perpetrator, may help some viewers.

It’s funny seeing the London Olympics from both sides of the time-stream simultaneously and comparing the London torch relay with the one I experienced in Tasmania in 2008. Cultural differences are fascinating.

FYI: a pick is NOT an axe. It never WAS an axe. Maybe Rose has an excuse but the council worker should have yelled at her in exasperation. I know I would have, but then – I have an axe to grind. (Yes, I went there. The minion is a bad influence.)

After some recent episodes, ‘Fear her’ is a definite improvement. There’s a bit less of the spotlight on the Doctor and Rose with a bit more emphasis on other characters. Although not flawless, the plot holds together better with interesting character work. Parental guidance and some gentle talks may be needed for younger viewers; regardless, I recommend littlies watch or listen to something warmer and fuzzier in between Doctor Who and bedtime.