Favel Parrett contributed to the Authors For Fireys fundraiser in January 2020. This mammoth undertaking was organised by Emily Gale and Nova Wheetman. They raised $513,149 to support firefighters and to help Australia’s bushfire survivors.

I am a novice card maker but I made the pictured card. This is a thank you to Favel for appearing as a guest on Dark Matter Zine and for supporting Australia’s firefighters. 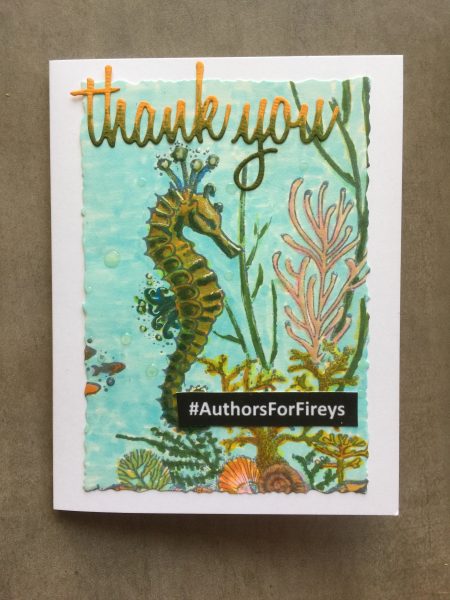 I am a novice card-maker! I cannot emphasize that enough. Also, I’m publishing the cards more or less in the order I’m posting them out, NOT in the order I made them. This one was relatively recent, after my attempts with sequins and ‘gems’.

Favel Parrett was the first person to ‘like’ this card on Instagram and it seemed SO appropriate for her after I reviewed her awesome fiction novel Past The Shallows. I highly recommend it.

Tabitha Bird liked this card second but I’m planning a specific image for her. Yesterday I watched some more crafting videos so my planned card for Tabitha is becoming more complicated. I hope it will be pretty and the challenge will be fun*.

*I may be a masochist. Jury is still out. One thing is for sure though: I don’t like actual pain and I’m OVER software “challenges”.

I have a few stamps from different sources: the seahorse and fish are separate stamps from the same Pink Ink packet (with the gorgeous octopus!) while the coral reef was made by Australian craft company Kaisercraft. Experimenting with stamping this a few times in different colors was effective. I still haven’t colored in the black ink stamp (oops) but this is my preferred option, stamped in a lighter blue. Alcohol markers colored in the picture. (With help

but I’m editing consecutive sentences beginning with the same word because SEO. Also passive tense offends SEO engines.) I die cut the ‘thank you’ and colored that in too.