I’ve been asked if I want to go from fanzine to semi-prozine. My answer is I am frustrated by the question. Prozine has nothing to do with Prozac: a prozine is a professional magazine or one that makes money and pays for content. The only reasons I see for defining one’s zine as a fanzine, semi-prozine or a prozine are

I’m frustrated by the question because it seems to me that the traditions of the science fiction and fantasy community are blinkering the community and holding people back from exploring potential.

Robert Lichtmann’s letter, published in the previous issue, suggested that Dark Matter either downsize or fold: haters gonna hate, especially when someone new comes along and does something different. At least Robert had the guts to say it to my face: I have been told a lot of other people were saying it in private forums behind my back. I’ll probably get Amanda Palmer’s teeshirt: the front says ‘Haters exit stage right’ while the back says ‘get thee to a nunnery.’

Here’s the thing: Dark Matter has only just begun. I see enormous potential that is untapped in the zine community, both professional and fanzine. I want to tap into that potential, I want to produce something that, as far as I’m aware, isn’t being done how I want to do it by anyone else at the moment.

My very minor superpower is interviewing people. Some people will take offense at that comment, thinking they can do just as well. I’ve seen interviews out there: some of them are, in my opinion, appalling. For example, The Age, a professional media publication, did an ‘interview’ with Summer Glau. Have you read it?  OMG. That interview showed an appalling lack of interest in Summer and a lack of respect for Summer’s fanbase and the SFF community in my opinion. A lot of interviews are very brief, only scratching the surface. A lot of interviewers ask the same questions.

I have been trained to interview people, and not in a ‘sound bite’ journalism-degree way: I’ve never been trained in journalism!  I’ve learnt to ask the left-field question, the question that leads to exploration. My academic studies have also helped me develop research skills so that I can study a person’s work, whether it be books they have written or movies they’ve made, analyse that work, analyse personal information available about them from the web (e.g. their website, Wikipedia, IMDB) and ask them questions that interest their fans and fans of the genre, questions that may inspire people to explore their ideas on a subject a little, that may challenge their way of thinking. For example, asking Brandon Sanderson about the varied religious and philosophical themes in his novels, asking GRRM at AussieCon4 whether seeing his books on the screen would affect his future writing and asking Christopher Kirby if he had the equivalent of LeVar Burton’s Uhura experience.

It takes time to develop sufficient credibility to get access to people of international renown for interviews. At the time of writing this, it has been 19 months since Dark Matter’s first issue. Dark Matter has received media passes for events like Supanova and Armageddon. It’s taken time to build up the readership, to demonstrate what is possible, for organisers to reach the point of working with Dark Matter. Last year at Armageddon, Dark Matter was given one official interview during the weekend. That went so well that there was talk of organising interviews prior to Armageddon this year. On Friday I interviewed Brandon Sanderson and Christopher Kirby courtesy of their publisher and Iron Sky PR respectively. At Supanova, Lionel Midford (Supanova’s PR) facilitated my interview with Edward James Olmos (Bladerunner, Battlestar Galactica) and Random House was supportive, endeavouring to facilitate more interviews than I managed – but Ben Chandler talked computer games and books with Dark Matter. It’s taken time to demonstrate to people that I’m courteous, considerate and looking to build community rather than just looking for a sound-bite or trying to self-promote with my interviews: ‘X says Dark Matter is great – you should read it!’ It’s taken time to get this far. I have plans to go much, much further, to interview more people, I’m learning as I go… Imagine what I could do, interviewing people YOU are interested in, if I had more contacts, the finances to get to more expos and conventions to report and to interview… This is part of my vision.

But that takes cold hard cash.

Reporting on conventions and expos

Other things that take cold hard cash are a website, competitions (even if it’s just postage), software, attending conventions and expos to report… I can now hear people leaping to their feet in indignation, pointing out that I’ve received media passes to a couple of expos. I need airfares and accommodation if I am to attend those same expos at different locations, with different stars and different people attending with different costumes to photograph. Going to interstate expos provides more opportunities for interviews, reports and reviews of presentations… Why limit it to interstate? With enough financial backing I could attend events in New Zealand… Why stop there? THE WORLD!!!

I have never received a free media pass to a convention nor to an MSO event. Not. Ever. Even if I received free media passes to conventions, without airfares and accommodation I’m limited to only covering conventions in Melbourne. I paid to attend the Doctor Who Symphonic Spectacular, but that was my limit for the year: I didn’t go to Video Games Unplugged because I didn’t receive a media pass.

Numerous people have written in asking for ePub and Mobi versions of Dark Matter. I’ve tried. I spent ages reformatting Dark Matter into single column format where no image sits beside text, absolutely no point of any more than one column. I then used Calibre to change formats.

It was truly appalling.

The outcome looked like something a primary school child could have done, with random font and text-size changes, images so small as to be pointless, grammar and spelling errors introduced into Dark Matter that were not in the original (believe me, I checked). I will not publish something at such a low standard. The solution, then, is to upgrade my software. This costs money as I’m not about to pirate software: Adobe is known for tracking down publications of note and penalising them if they have been created using their (valid) educational software or pirated software. I’m not going there. I’m currently using an out of date educational version of their software and I’M VERY STRESSED. I need to upgrade to either an equivalent product created by someone without the Adobe price tag or to upgrade to a more recent and full version of InDesign so that I will not come under fire from Adobe AND SO I CAN PUBLISH IN EPBUB AND MOBI FORMATS. Upgrading is not cheap.

[Note: since this article was published in Dark Matter issue 9, I purchased InDesign CS6 thanks to the support of a generous donor.  Sadly CS6 has fixed fonts less than 3mm high that do not scale with Windows 7 larger fonts so I returned it and bought a camcorder instead.  I’m phasing out the old-school-style zine in favour of the website.]

The answer? Donations. I figure if people really appreciate what I’m doing here, and if they really want ePub and Mobi versions, if they want DMF to continue to grow, they’ll contribute. In the end, needing new software and needing it NOW was the tipping point for me to set up donations.

I interviewed Brandon Sanderson on Friday, and talked to him about how his novel, Warbreaker, was released in instalments, comparing it to Charles Dickens’ novels’ release in newspaper. Brandon enlarged on that topic (see the interview); his key point was that the fans who purchase his novels are his patrons, saying that he wants to ‘give back’ to his fans. Christopher Kirby also talked about the loyalty of science fiction fans; I asked about the patron model and Chris completely agreed with Brandon. Scott Kurtz and Kris Straub, at the Supanova Masterclass, also completely agreed with this model. They enlarged on this idea further: if you have one thousand dedicated fans who are prepared to support you to the sum of $100 per year, you can live on that while you’re creating and releasing your work free on the internet. It takes millions of fans who can ‘take it or leave it’ and just give a little. Or it takes a few thousand fans who want to help save Kirby (a dog with a $3,000 vet bill) all donating $1, $2 or $3 to pay the vet bill. Scott made ‘friends of Kirby’ stickers for donors, and he still gets fans coming up at conventions showing him their sticker: it shows fan’s support, it builds community…
I haven’t charged for Dark Matter. This is partially because, in the past, I’ve been so broke that I couldn’t afford petrol or bus fare to take my kids to the park. I know how much that hurts and I don’t want someone else who is in that position to miss out. I also figure that piracy is out there and I’m a fool if I try to prevent piracy.

Additionally, I wouldn’t have developed the audience I have as quickly as I have if I charged for Dark Matter and put it behind a paywall. I put my product and myself, out there, in the hope that the fans would respond by supporting what I’m already doing. I’m endeavouring to build community while offering a kind of service to the SFF community; fans who donate would be helping take Dark Matter to the next level, also helping to build community.

When I invited donations I never dreamt that anyone would donate sums of $100 as Scott and Kris mentioned; donations this size are very welcome and I’m working through a process of offering rewards in the event of such generous donations. (I need to spend a few days looking through Kickstarter and Pozible projects to see what others are offering as rewards. I also need input from readers – would covers be good? Does anyone want them autographed? I’m still trying to get my head around someone identifying himself as a ‘fan’ of mine – what a compliment!) When I started asking for donations I was hoping readers who could afford it would appreciate Dark Matter enough to donate anything from $1 to $5 for each issue, to help defray costs and build a bigger, better Dark Matter for the future. Effectively I’m hoping that readers will want to be my patrons.

Here’s the thing in a nutshell: the sky is the limit with Dark Matter. I can do SO MUCH, but it takes cold hard cashy-money. It’s not important to me whether Dark Matter is a fanzine or a prozine. What is important is tapping into the potential that is out there. Doing the interviews, asking the odd questions, reporting on the conventions, meeting the SFF community and building bridges. I’d love to attend and report on every major SFF convention and expo in Australia and New Zealand. Not only do Aussies and Kiwis enjoy reading about themselves, conventions they’ve attended and conventions they couldn’t get to, the SFF community overseas is also interested in what’s happening in the Antipodes. Enlarging my vision one more step: I think Aussies and Kiwis would enjoy a roving reporter who provided on-the-spot coverage of a few major events overseas, such as the world SF convention and the world fantasy convention. None of this will happen overnight, but I hope that it will happen.

It all depends on you. 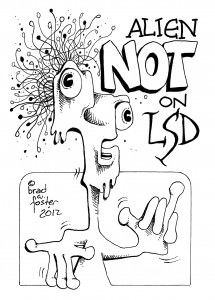 Alien Not On LSD by Brad Foster