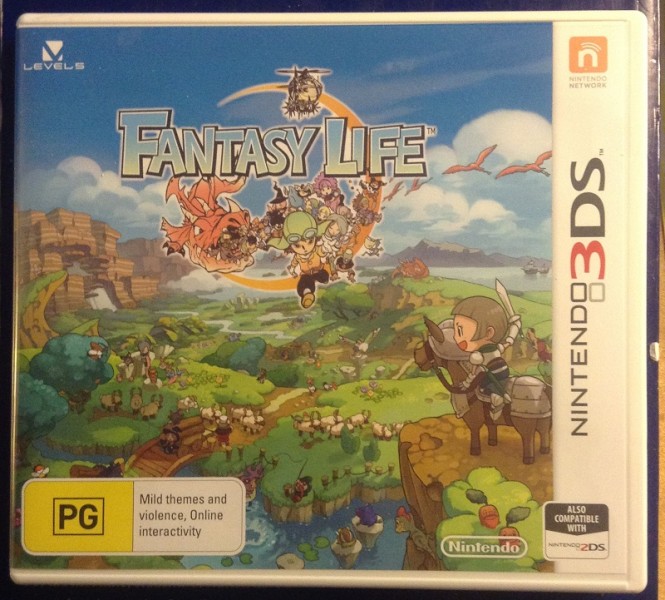 A review by Rebecca Fleming

I had never heard of Fantasy Life before the game was shown at this year’s E3. When I saw it was made by Level 5 (the same developer behind the Professor Layton series, which I love), I decided to check it out and, after seeing the gameplay footage, I knew I needed this game. It did not disappoint.

After customising your character and choosing your starting Life, you wake up in the attic of a house owned by Castele’s real estate agent, Pam. One of the first things you do is rescue a talking butterfly named Flutter, who is being attacked by two thugs outside the house. Soon you’ll learn that Reveria is in danger of being wiped out by mysterious dark stones that are falling from the sky and you’ll be summoned to the Castele castle by the King, who will request your help in averting disaster. Thus, accompanied by Flutter, you head off on your quest to save the world from destruction. The story for Fantasy Life is fairly simple — and predictable, if I’m honest — but this isn’t the sort of game you play just for the story. Though you will occasionally come to areas you can’t access yet because you haven’t progressed the main story far enough, the game mostly leaves you to your own devices, letting you wander and explore to your heart’s content.

Having talked about the story, this is probably a good time to bring up the main problem I had with the game: prepare to encounter numerous walls of text. Though the character dialogue is well-crafted and sometimes actually funny (you’ll notice a lot of friendly nods to other games, movies or other pop-culture icons within character conversations), it can get a bit tiresome to sit through what feels like pages and pages of dialogue when you just want to get on with the story. At times I found myself button-mashing to get through the conversation cut scene, only to get to the end and realise I wasn’t 100% sure what to do next as I had missed it. This is a minor niggle — as I said, I actually enjoyed a lot of the dialogue — but I did feel some of the cut scenes could have been shorter. 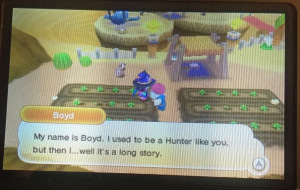 The main story can be finished in about 6 hours (to be honest, the ending felt a little abrupt and I would have liked the story to have gone for a bit longer) and none of the challenges you face during its progression are all that challenging. The real fun can be found in exploring the different areas, gathering materials, crafting items and battling monsters to rank up the various Lives (and these do provide some genuine challenges the higher up you go, especially some of the hunting missions). I often got distracted from the main quest because side characters would ask me to bring them something, so I’d happily go off and hunt for the various materials needed to make the item for them. As a result, my save file had just kicked over 50 hours of play time when the end credits rolled. At the time of writing this review, I am hovering at about the 110 hour mark (yes, I need an intervention). It’s worth doing these side quests when you can because you will be rewarded with Dosh (the game’s currency) and often items as well, some of which can be difficult or impossible to obtain otherwise. You can also find passwords (most of these are now available on the internet) to tell the Post Office clerk, who will give you special furniture or costumes, such as this dragon costume: 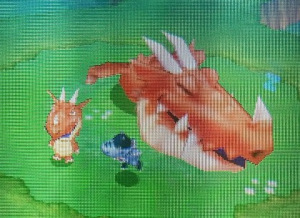 Dressed as a dragon to attack a dragon with my pet dragon. #Dragonception (I am not sorry)

There are twelve Life classes you can choose from. First, there are your fighting classes: Paladin, Mercenary, Hunter and Magician. Then you have the gathering classes: Miner, Woodcutter and Angler. Finally there are the crafting classes: Blacksmith, Carpenter, Cook, Tailor and Alchemist. You start each Life as a Fledgeling, but as you complete more and more challenges for that Life, you can progress through the ranks; the higher your rank, the more items you can buy from shops that are relevant to that Life. While other games often impose a penalty for changing classes (such as resetting your points or restricting access to moves or techniques you learned as a previous class), Fantasy Life allows you to change your Life whenever you want with no consequences (the only restriction is that you can’t start a new Life while you are in the middle of a story chapter, but you can switch to any other Life you have already attained the license for). Some hardcore RPG fans might not be thrilled with this as it does remove some difficulty, but I think it’s a good way for younger players or those who may not be that familiar with RPGs to get into the genre. Fights are in real time and when an enemy is defeated, it does a hilarious little pirouette before falling to the ground and vanishing; if you’re looking for gory battles or turn-based fights, this isn’t the game for you.

You can complete the main story using just one Life, but if you want to get the best items, you will need to experiment with different Lives, and some subsets of Lives can actually work well together if you just focus on those. For example, you may want to be a Paladin and get the best sword you can, which means you will need to craft one as a Blacksmith; however, to do this, you will first need to mine the required ore or metal as a Miner. Though many materials are available from shops (and more become available as you progress through the ranks), most can be found through exploring the world around you. Nearly everything is collectible; as soon as you leave Castele, you will see flowers and plants, fruits and honey, and trees and ore deposits. You can also fish in lakes and rivers and hunt large birds or animals to get meat and eggs. All the materials you find will be useful in various crafting recipes, so it’s always worth stopping to shake some apples out of a tree or kill a few animals as you run past on the way to your next adventure. Some large monsters will drop a Bounty when they are killed, which you must take back to a Guild Clerk to exchange for a Dosh payment and whatever item is inside (some items can only be found as Bounties). This can be more challenging than it looks as other enemies will often attack your Bounty and destroy it, meaning you lose both the Dosh reward and possibly a rare item. Also, some materials can only be gathered once you have reached a certain level in the relevant Life or if you have a strong enough tool; for example, some of the trees you come across will be too strong for your starting axe to damage, so you will have to come back to cut them down later in the game when you’ve upgraded it. 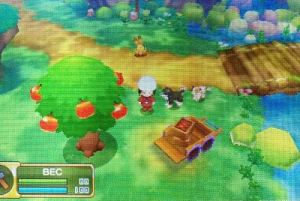 Fantasy Life certainly caters to those with an Animal Crossing-esque urge to collect things.

Nearly all the tools, weapons, clothing and armour you find can also be crafted, as well as food or medicine items. You can, of course, simply go and buy these things, but a) this works out to be a lot more expensive than if you get the materials and craft it yourself, and b) your items can turn out higher quality depending on your timing during the crafting mini-game. This gives it increased stats, so a high quality weapon you make yourself will have more attack power than the same weapon bought from a shop. Everything you do — from cooking to sewing to hunting — gives you experience points, so you’re always levelling up. Going up a level gives you points which you can use to increase stats of your choice such as strength, intelligence and dexterity (each of which benefits a few specific Life classes).

As you play through the game, different actions — such as helping people, making allies or reaching certain levels or ranks — will give you Bliss points. These can be exchanged for various bonuses, such as increased bag or storage space, a larger range of items available from the different shops and the ability to have pets, who can join you in the field and battle enemies at your side. Though I would recommend making bag upgrades a priority (you start being able to carry only 100 items and this fills up fast), I couldn’t resist claiming a pet as my first bonus, just so I could have a little doggy running around after me (and of course I called it Rex, after my real dog).

Another thing I love about Fantasy Life (in addition to the cute and witty dialogue) is the charming art style and music; the characters are in almost-chibi proportions, and even some of the enemies are adorable (I always felt like such a monster for killing the cute little wolves and coyotes, but I needed their animal hide for crafting).  The world of Reveria looks beautiful on the 3DS, from the forests of Castele to the coastal beaches of Port Puerto to the sprawling desert around Al Maajik. Each area has its own distinctive background music which suits the scene perfectly (hardly a surprise since it was composed by Nobuo Oematsu, famous for his work on most of the Final Fantasy soundtracks). There’s also a lot of room for customisation; anything from your character’s costume and weapons… 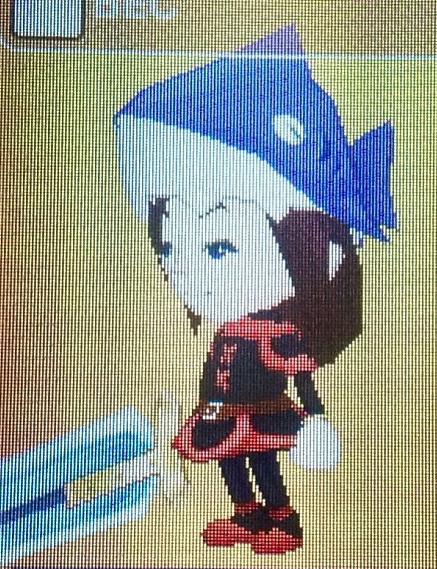 I am wearing a shark hat because reasons.

… to your furniture and decor (once you buy a house) can be made to look exactly how you want it. 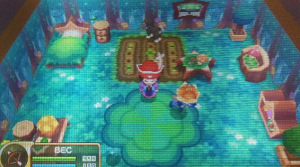 My forest-themed bedroom in my house in Castele. It’s not easy being green…

FINAL NOTE: This game has DLC available on the eShop (at around $10.40 AUD) which extends the main story line, provides new areas to explore and presents new quests. I have purchased the DLC but have not yet finished the extended story; I will update this review when I have done so.

I can honestly say Fantasy Life is my favourite on the 3DS. It almost feels as if it was made specifically for me. Whether you want a game you can pick up and play for short bursts or indulge in for hours on end, this game has something for you. Though it had some minor problems, it is still well worth the $50 or so, and I dearly hope we get a sequel.

[I am NOT going to comment on the star-substitutes. No, not at all. — editor]