Once more a book I loved inspired me to venture into scrapbooking: Daughter of Lies and Ruin is about two witches who brew potions in their cottage then travel around to sell them. And have adventures. By the way, I interviewed Jo Spurrier a few years ago; that interview is here and on all good podcasting platforms. And this is the publishers page for Daughter of Lies and Ruin.

This page started with the dies, including the cauldron, cobweb, shelves and bottles, which I purchased because I wanted to do this scrapbooking page. I’d seen a whole bunch of Halloween creations using these dies, all of which put my efforts to shame.

Once I started, I realised that the Halloween creations were all smaller, much narrower and a bit shorter than the 12 inch square paper I was using as a base. I tried a page with woodgrain as a background but it seemed too dark, all the objects seemed to get lost in the gloom. Now I wonder if it simply wasn’t dark enough to give sufficient contrast, because damn! Some of those Halloween displays are gorgeous and dark.

Anyhoo, I was trying to represent the witches’ cottage and their activities. I played around with it a bit, trying to build the scene by placing and moving the pieces. In the end I’m not happy with this page but it’s the best I could come up with. Next time I try a scene like this, I’ll probably use an Etcetera Tag or something similar, that’s smaller.

Early on I was playing with colouring the bottles and placing them in various ways. Ghosts jumping around (because the Blackbone Witches Book Three is SO SCARY

) and a raven in on the action with bottles bouncing around and one about to spill seemed fun. I’m not sure that the execution really worked — does it look accidental or deliberate? I’m not sure. But that was my intention.

I’m never happy with the photos I take of my arts or crafts because I can never, no matter how hard I try, get the lighting the way I want it. In the first image below, the light is coming from below (from the window), emphasising the raised position of certain items. This might have worked if I’d had what I needed to do the fireplace (part of my original plan but it ended up being too hard at the time). 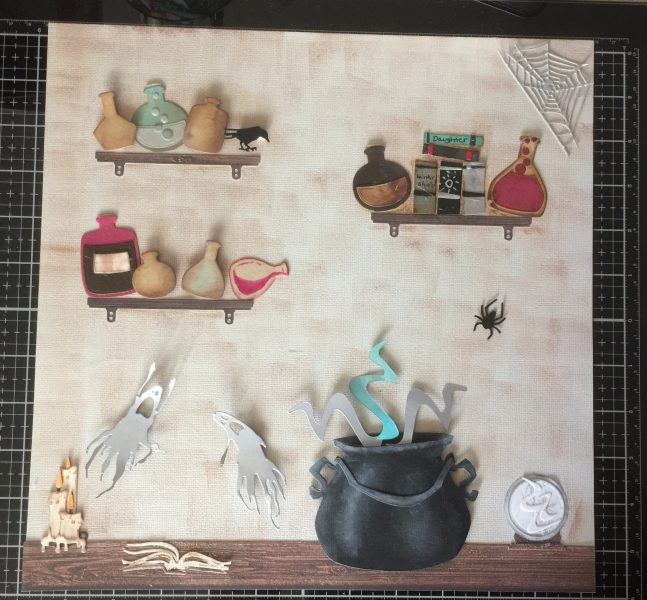 The second time I photographed this, I’d added an image of the cover of Daughter of Lies and Ruin. I printed it when I printed the copy of A Lifetime of Impossible Days (the next fanart page scheduled for next week). This was when I discovered my printer’s ink is sarchival and fade-resistant. Plus I realised I can print to 4 x 6 inch photo paper. What I didn’t know was that the printer was set to print on glossy paper whereas I’d bought matte paper. Thus the next project, version 2 of The Starless Sea, has a much better printed image: I discovered this option and changed it.

Plus I took this photo near the window: I moved my media matt to the floor just next to the window, so the light source is closer (hence the shorter shadows) and it’s coming from the top of the image. 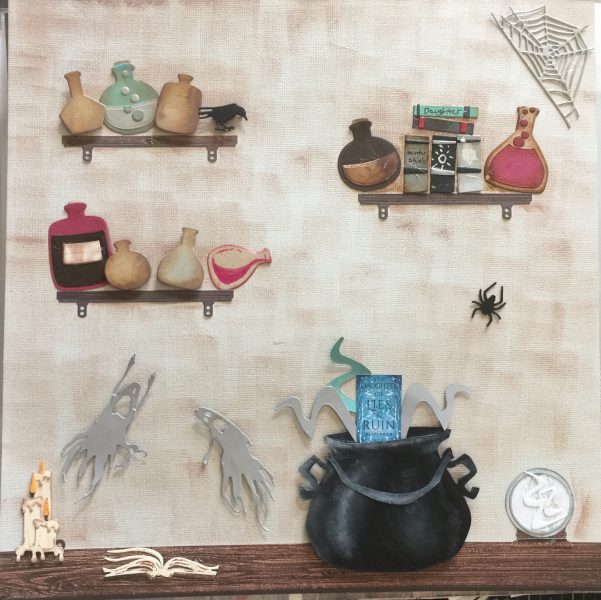 I might make another attempt at something like this but probably not until book 3’s release (next year hopefully). This page was fun to make and I learnt a bit. For example, this was really my first experiment with using ink blending as a form of colorization. I was quite pleased with the results on the cauldron. I’m not sure about the variegated color on the wall though. I was going for a hint of brickwork but I’m not convinced, and I’m the creator! If I do have another try, I think I’ll use some of the gorgeous Halloween demos for inspiration and see if I can get something that looks less empty, less like I’ve used dies too small for the page.